Below is a recent email of someone with multisystem undiagnosed problems that would be daunting to say the least;

I have extreme hyper mobility and unexplained stomach pains as well. The stomach pains had began as a child and food intolerance as well as laxatives were provided. I too began limiting certain foods for various reasons at a young age i.e. 3-7 before limiting diet for known psychological reasons i.e. Anorexia/ Dysmorphic body disorder, beginning at about age 9 from my recollection. The stomach pains were diagnosed numerous times throughout my life from growing pains, allergies, anxiety… multiple ambulatory “gull bladder attacks” to GERD, ovarian cysts, stomach virus and food poisoning (while overseas), back to peptic ulcers and burst cysts that have landed me literally on the floor and in the emergency room at least yearly for all of my life. I have been tested and do have gluten and cows milk allergies as well as allergies to almost everything: to note: the animal and enviro allergies didn’t seem to become an issue until my early teens when I also had diagnosed athletic asthma( for a few years only). Now, age 32, I have constant constipation/IBS and what seems like either yearly or possibly seasonal stomach pains that they diagnose as ulcers or cysts. I’m wondering if it’s not a bug? I have always suffered with some psychological issues, however I have also had continuous emotional and physical traumas that have made healing almost impossible lol. I spent my teens on multiple SSRI’s as well as Venafelaxine and some sort of tranquilizer i.e. Clonazepam, lorazepam, multiple others and my twenties on and off increasingly stronger opioids as physical injuries took place. Note: also finding in these times of my inability to handle any NSAIDS (even with stomach coater). So it made sense to me that opioids=gastric issues. Or is there something more? I read an article on the relation between EBV and thyroid issues as well as auto immune disease ( have been in process of/ diagnosed with hypo thyroid, bouts of psoriasis (started after a slip and fall in which I broke skin on the knee and soon after found skin plaque) as well as high rheumatoid factor, reynauds syndrome and arthritis found in X-rays in low back, hips, and around foot joints where previous surgery had been done. Note: pins put in my feet later found by another orthopedic surgeon that the wrong surgery was done back in 2010 as improper healing continued for years post. I have known adolescent scoliosis, multiple car accidents including neck
Injury and blunt force trauma to multiple areas, the last being to head, neck and knees(2006). And since then a few major slip and falls, which over the last year has been causing extreme pain. I had a slipped/bulged disc diagnosed years ago and re occurs almost yearly. Joint pains seemingly connected to rheumatoid with fever, redness, swelling and then of course chronic fatigue that varies from mild to extreme mixed with insomnia, ptsd and now unexplained almost noctual sleep disorder in which I find myself asleep standing, or shortly after falling, in odd sitting positions or areas, possibly tied to times of extreme stress… i.e. Flying? Apologies for all the information, it keeps coming to me so I hope to maybe shed some light in well, any of the areas. The major point being pain, hypermobility, and stomach issues… I hope it’s ok I have so much info that’s unrelated. There is more… much, much more, but sadly my ADHD and lack of memory has my vocabulary and categorization skills quite limited. Plus years of moving, short doctor visits and inability to figure out one issue at a time has me now frozen and all this + + + to deal with and few to no doctors that care to try and figure it out. I don’t blame them. None the less, thanks for the space to let me share. I’m open to answer any other questions anytime here …. Bless your heart for having me. You’re one of the only ones to have actually helped improve my daily struggle. So thank you. Good luck and take care.

Sounds like one of the worst cases given so many involved factors:

This would be one of the worst cases –  I have a diagram to catalogue the issues in chronic pain. Here is my guess of what I have got out of hers: 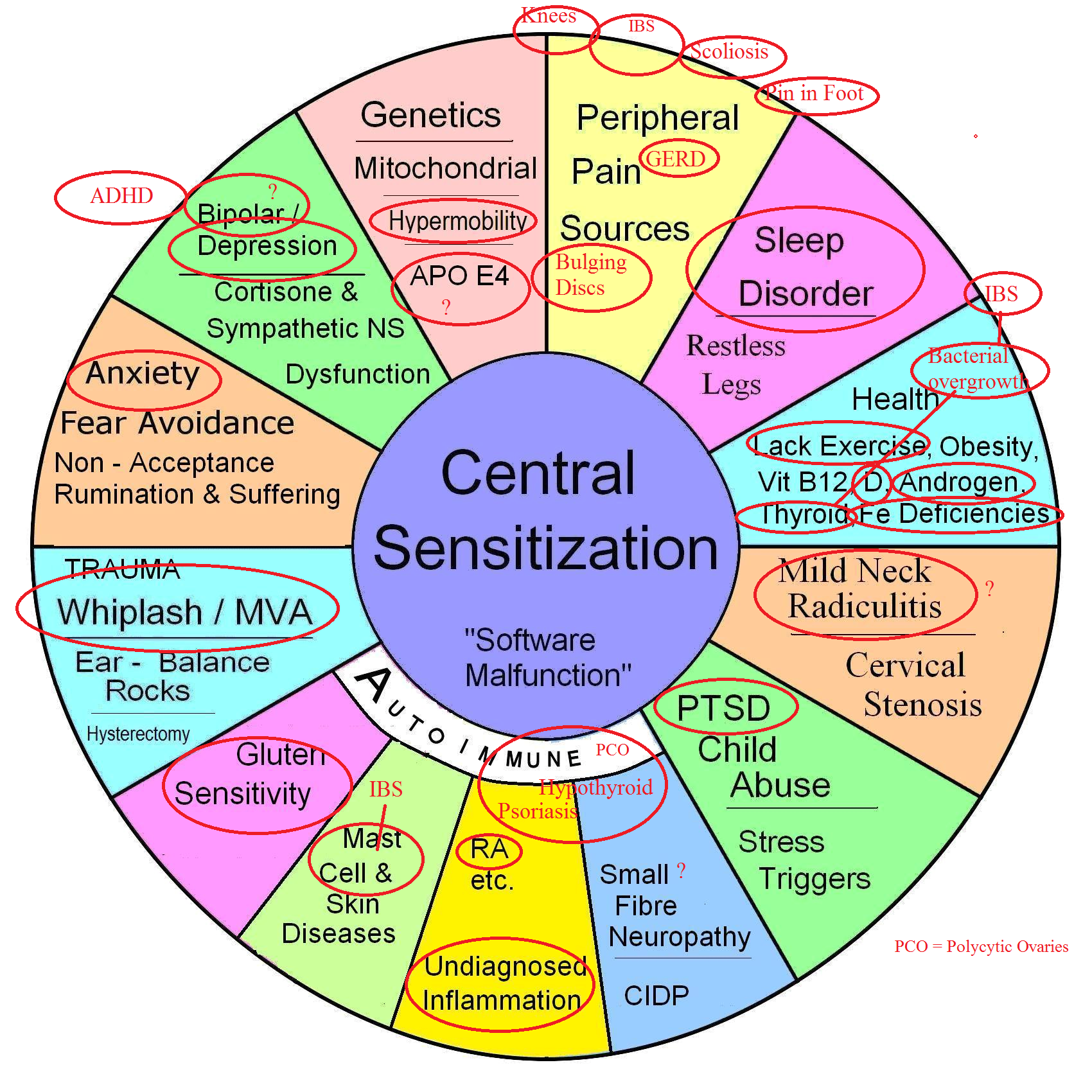 With so many potential pain factors I suspect one might only achieve a palliative care level of pain control. If life is chaotic was well then  the best I have done is to help subject get low income housing…

Some suggestions:
1) Gluten free diet – is especially helpful but takes 3-6 months to help widespread pains. there is a flavour that isn’t even celiac but still has major issues:
New Help for Some Fibromyalgia (FM) – Gluten Sensitivity Management
http://painmuse.org/?p=4330

and more – There is a subgroup of people who can’t clear histamine from their system because they lack Diamine oxidase enzymes. Going on a low histamine diet and taking DAO enzymes help but are not cheap. Much of the info comes out of Spain.
http://www.deficitdao.org/en/dao-deficiency/what-is/

I find it difficult to discuss allergies with chronic pain patients because they often have cats and dogs as pets which they a ill suited for. If histamine is high, one should have dermographia (can scratch words on their skin).

2)Rushing around as a form of exercise might be the only exercise tolerated and is assocated with a pain drop of 0.8/10
Fontaine, Kevin R., Lora Conn, and Daniel J. Clauw. “Effects of lifestyle physical activity on perceived symptoms and physical function in adults with fibromyalgia: results of a randomized trial.” Arthritis research & therapy 12.2 (2010): R55.
https://arthritis-research.biomedcentral.com/track/pdf/10.1186/ar2967?site=arthritis-research.biomedcentral.com

Of my more severe patients on ketamine, I found a rate of bipolar or lifelong depression about 80%. This corresponds to a study involving neck neuropathic pain:
Classification and Treatment of Chronic Neck Pain A Longitudinal Cohort Study
Richard Liu et al
Regional Anesthesia and Pain Medicine 42(1), January-February 2017; 52-61
https://www.ncbi.nlm.nih.gov/pubmed/27846187
“Participants with neuropathic pain were more likely to have a coprevalent psychiatric condition than those with other pain types (86%…”

Please note: You might notice certain times of year where you feel more nervy and the pains are worse. These need special management as being nervy and in pain is very painful as they might represent mixed mood state “agitated depression”.

4) Hypermobility with severe bowel issues from bowels just “bouncing” on stools rather than propelling them ( and don’t forget terminal constipation = won’t come out last inch).
Measures I have seen advocated include Prolotherapy,  muscle training and  nerve flossing techniques

5) Obvious multiple antoimmune illnesses – Polycytic ovaries (maybe), Thyroid, Celiac, Psoriasis). I would suspect you would have chronic low iron with the celiac malabsoption and maybe low B12. Those low levels will both need testing and treatment.

6) All leading to Undiagnosed inflammation – I would expect considerable morning stiffness and back pain.
I would treat you initially with prednisone though it would play a number on your nerves, followed by methotrexate like they use in RA
Fibromyalgia – Responses to Methotrexate and Steroids
http://painmuse.org/?p=4373

7) What you did not mention was any numbness in your hands or feet which I suspect must exist as an autoimmune small fiber neuropathy – Frequent B12 shots, steroids help. A pulse of steroid IV could be tried but equivalent is 40 mg dexamethasone/day for 4 days

9) severe chronic constipation which would respond to magnesium citrate, restoralax and constella 240 mg (not cheap). Probiotic Align helps IBS; Peppermint oil in IBgard is supposedly helpful but I have not tried it yet. People with hypothyroidism are highly prone to bacterial overgrowth for some unknown reason which would aggravate IBS. Ulcer medications for GERD result in overgrowth as well.

10) multiple peripheral issues in back, leg, and neck

11)Severe pain which might respond to: (some have blog note)

daily B12 shots
Chronic Back Pain Help – Forgotten B12 Injections and What Else Good For…
http://painmuse.org/?p=1543 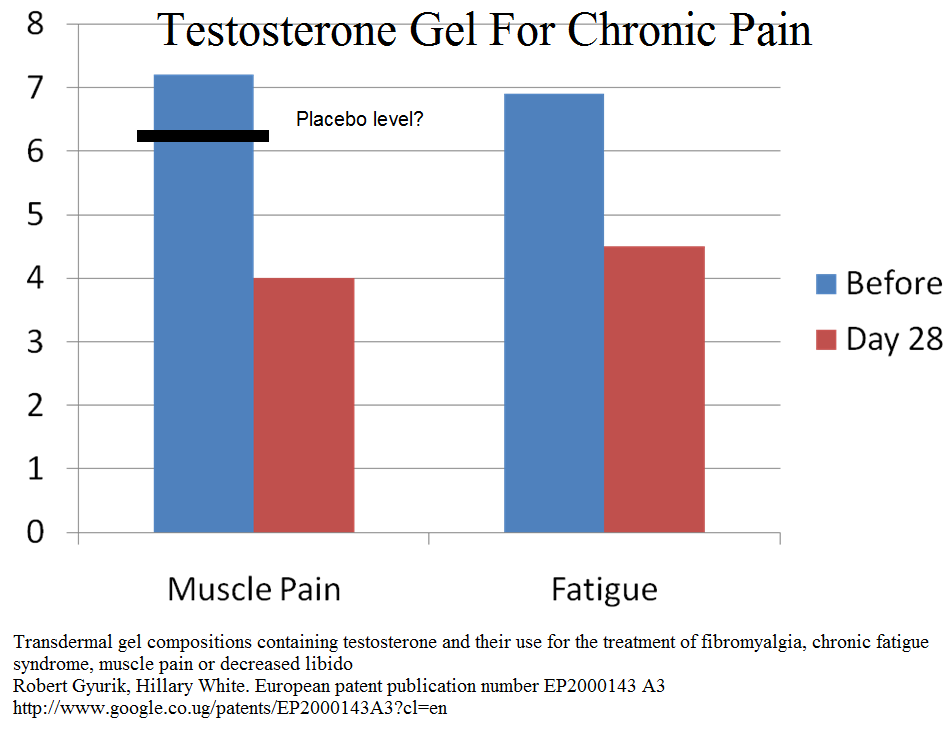 Prednisone and Methotrexate
Fibromyalgia – Responses to Methotrexate and Steroids
http://painmuse.org/?p=4373

Depression is unlikely to respond to meds and transcranial magnetic stimulation would be worth a try. Often family matter can be severe and one ends up treating the son’s ADHD etc.

If pain is severe, she would be better off on methadone.