Over the past couple years there is growing evidence that maybe 1/3 of Fibromyalgia patients with IBS actually suffer from non-celiac gluten sensitivity and respond to gluten free diet – some within a few month, and some “gradually… over many months”. Gluten free diet could be life changing with remission of symptoms and back to work.

First of all, 6.7% of FM cases were found to have frank Celiac disease:
Rodrigo, Luis, et al.
Remarkable prevalence of coeliac disease in patients with irritable bowel syndrome plus fibromyalgia in comparison with those with isolated irritable bowel syndrome: a case-finding study.
Arthritis Res Ther 15.6 (2013): R201.
http://www.biomedcentral.com/content/pdf/ar4391.pdf 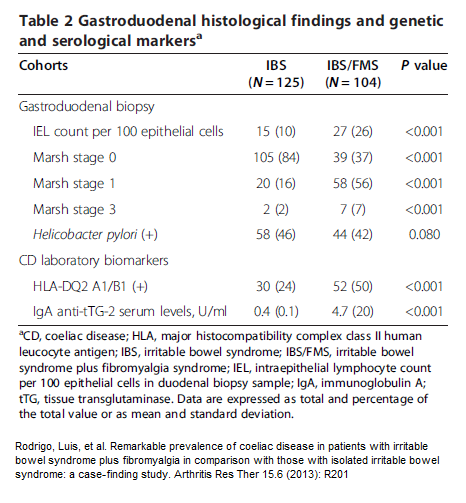 Some of those with FM plus Irritable bowel respond gradually to gluten elimination: 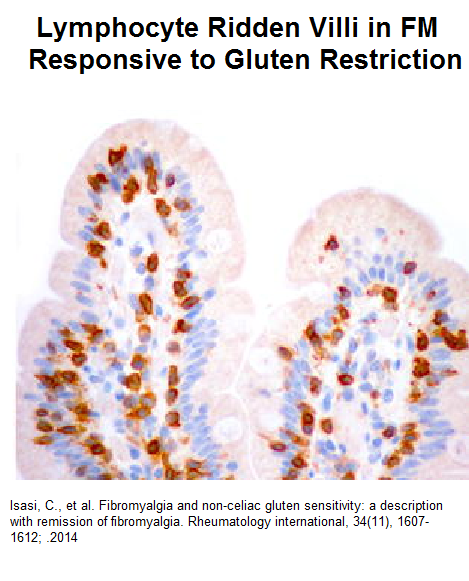 Since this study, Further elucidations have been been written up by same group:

50-70% of FM cases have gastrointestinal problems:

Does have a fascinating analysis of FM symptoms more than  controls: 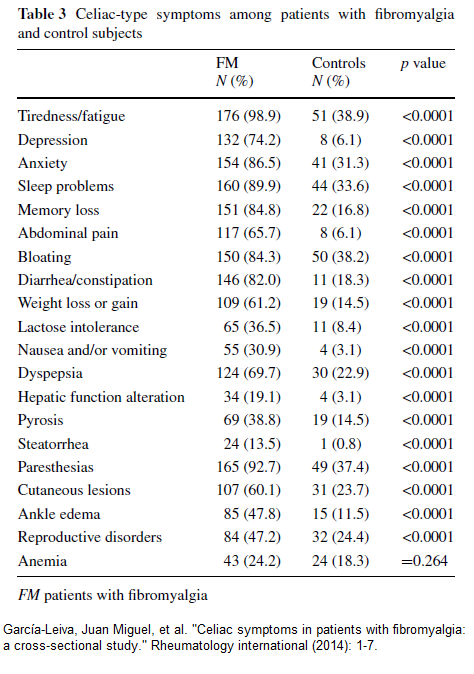 The high frequency of cutaneous lesion is interesting given that 70% of chronic urticaria have fibromyalgia and the association of celiac with dermatitis herpetiformis/chronic itch and aphthous ulcers. The ankle edema is interesting in its association with sleep apnea and the recent finding a diuretic, spironolactone, helps FM. The paresthesias is interesting in its potential association with small fiber neuropathy found in perhaps 40% FM cases. The high rates of reproductive issues could in part be related to association with Polycystic Ovaries(PCO) and how endometriosis can trigger central sensitization. Low ferrritin is strongly associated with FM and a common cause of that is malabsorption which Celiac ca do; anemia is much more common in celiac. Memory loss, depression, and fatigue are also more common in FM than celiac.

A comparison with gluten sensitivity cases gives this picture:

Comment -The  problem is the lack of serological tests and the fact duodenal biopsies are not done on these cases. I have one lady with increased cellularity observed on Villi biopsy totally ignored by her gastroenterologist that concluded she was hysterical  – so biopsy results may just be ignored. I have over the years been surprised by how many FM subjects had noted that wheat bothered them. I have had mixed results about gluten elimination but often that period of elimination would not have been long enough to have helped the FM much. It looks like subjects with FM AND Irritable Bowel might want to eliminate gluten for an extended period, particularly if they note wheat bothers them some. This picture is changing rapidly:

Vitamin B6, B12, and E can be deficient in celiac and it would be prudent to take

Addendum – the very next day I had an old Fibromyalgia pain patient come in for a physical. I had not seen her for some time so needed to get out the old paper chart (electronic 5 years). She had multiple chemical sensitivities and an irritable bowel but tested negative for celiac though wheat did  bother her some. She has been off wheat for some years and her pains gradually disappeared except for some neck-shoulder mechanical issues. This is why she has not needed to come in..

Another patient that morning, again a widespread pain with irritable bowel, has chronic nausea/vomiting and has been worked up by a gastroenterologist and was negative for celiac.  Her pains do not respond to any treatment. She has however, been off wheat for 2 weeks (boyfriend a chef had helped do this). Her nausea is better and I wonder if we wait some months whether her pains will improve as well…

I am certainly a believer that there is something to this wheat issue. I had failed to procure major results with pain before because most would give up gluten free diet after a couple weeks. – If it takes months + to get better that could be an issue.

This entry was posted in Fibromyalgia. Bookmark the permalink.