The Intercostobrachial Nerve(ICBN) -What is it and Why Can’t Breast Cancer Surgeons Deal Better With It? – and What Can You Do With It After.

Injury to the Intercostobrachial nerve following breast cancer surgery helps trigger the persistent neuropathic pains after. Why don’t we hear much about it? Here is some info on it.

It has been written that between 80-100% of time the intercostobrachial nerve is damaged by breast cancer surgery – and those who had a lumpectomy – let us not forget the axillary node dissection. (as written in: 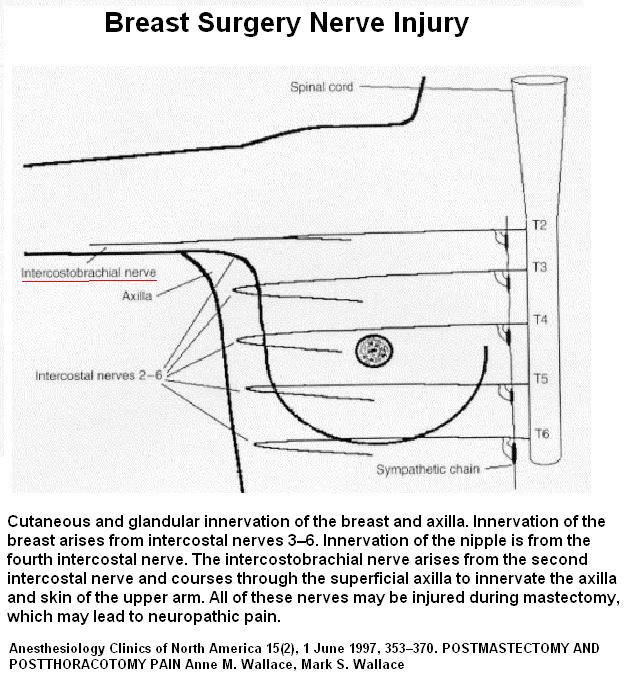 Along with this it has been written that “Post-mastectomy pain syndrome (PMPS) is experienced by 20–65% of patients who undergo breast surgery for cancer.”
Pain Volume 108, Issue 3, April 2004, Pages 294–296
Some cases of severe post-mastectomy pain syndrome may be caused by an axillary haematoma
Cornelia Blunta, Angelika Schmiedel   abstract here: 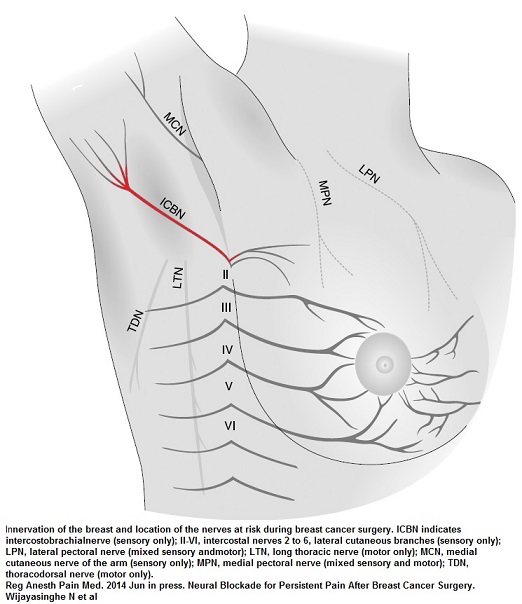 It comes out at T2 intercostal space in anterior axillary lline – look for tenderness there:

It comes out the 2nd rib intercostal space at anterior axillary line: 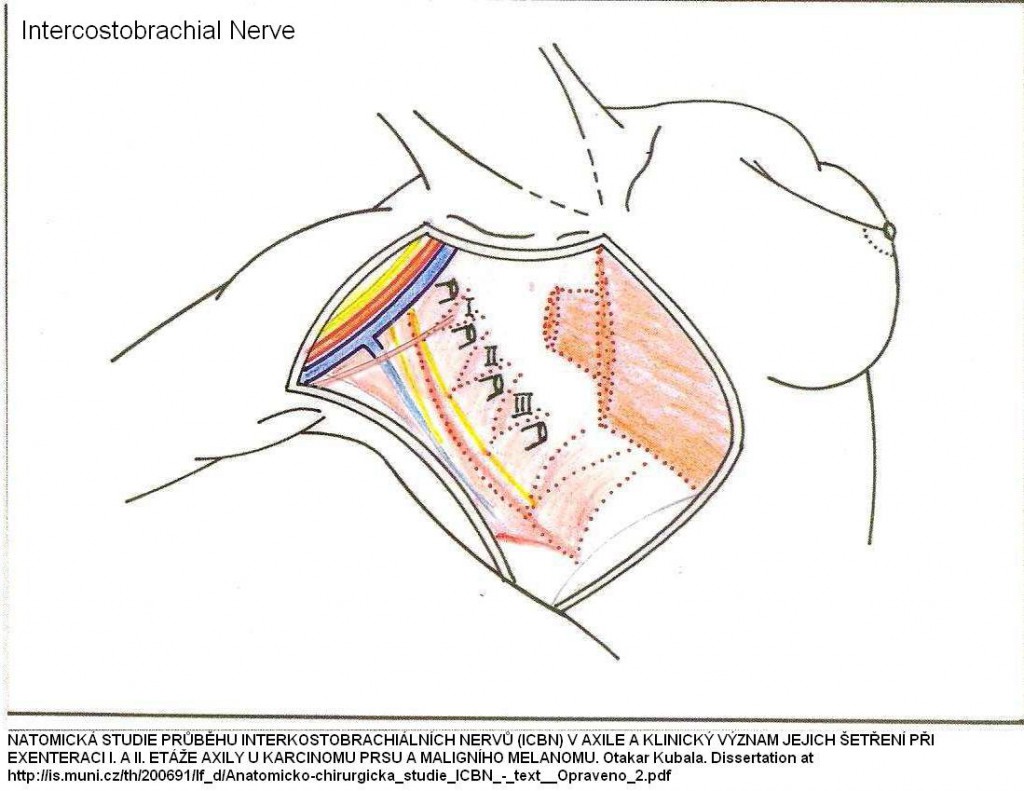 Not a discrete block as multiple branches – instead injecting a subcutaneous strip front to back at bottom-most axilla: Syndrome of ICBN entrapment has been described:

For the intercostobrachial nerve damage cases various measures have been documented:

Gabapentin at 300 mg tid was found helpful in this article: Gabapentin has been combined with Mexilitine for post mastectomy pains:
Fassoulaki A, Patrisk, Sarantopoulos C, Hogan Q.
The analgesic effect of gabapantine and mexiletine after breast surgery for cancer .
Anesth Analg 2002;95:985-91

They did FOUR block and got good results

Recently an Ultrasound guided block of ICB nerve got some benefits though like other pains issues, repeated blocks are required to get much permanent results.

persistent results were not well demonstrated “One week after the block was administered 2 patients demonstrated an improvement in their functional impairment scores (-17 and -29). However, 3 patients experienced a slight increase (13, 4, and 6) and one patient had no change.” 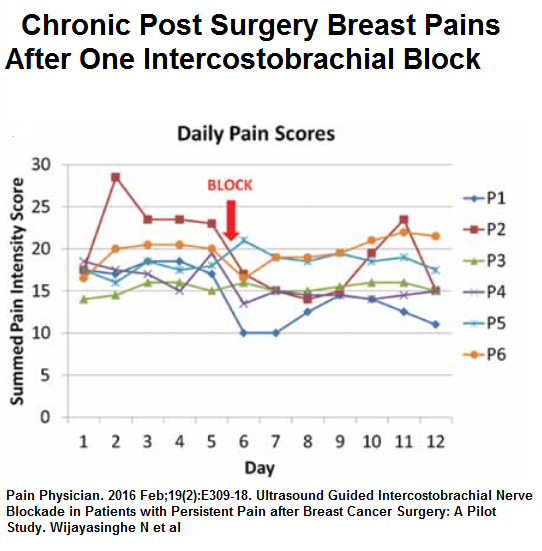 I use 5% lidocaine which has semi-neurolytic (mild nerve killing) properties – I gave a lady recently 0.5 mils into 2nd intercostal interspace laterally, 0.5 mls into point maximal tenderness, and rest into areas unaffected. She was much better week later and needed injection into posterior deltoid areas only. Why don’t surgeons deal with it?

I will try to expand on treatments sometimes

If you have good or bad experiences, I’d like to hear.

God help those who have mastectomies…

Over 5-7 years after breast cancer surgery over 1/3 of women have persistent pain:

Comments – I use nerve damaging blocks of lidocaine 5% which like for shingles have to be given repeatedly: Scar injections might be needed to.
http://painmuse.org/?p=724

Part of the problem can result from fibrous cords that can develop in armpit that can occur particularly when axillary dissection or sentinel biopsying is done: 20 Responses to The Intercostobrachial Nerve(ICBN) -What is it and Why Can’t Breast Cancer Surgeons Deal Better With It? – and What Can You Do With It After.