Cervical Radiculitis Without a Cause ? Chickenpox Zoster Virus History High

If you take cases of cervical radiculitis – if imaging shows possible reason for it, they give a history of having had shingles at about 18.4%. In cases with normal imaging, the prior incidence jumps to 81.6%  (p<0.01) – most of them not within the last 24 months. This leaves one to wonder if the virus had some input into this disease or whether abnormal autoantibodies contributes to some autoimmune syndrome.

81.6% in mri negative group history shingles – mostly over 2 years ago

Comment – question of whether course of anti-virals should be tried in cervical radiculitis of unknown cause. There is a syndrome of Parsonage–Turner Syndrome:

Comment – saw a case of Parsonage–Turner syndrome in which pain over triceps area was severe. Neck movements would not precipitate it. Frequent B12 injections were a help as per:
Chronic Back Pain Help – Forgotten B12 Injections and What Else Good For…
http://painmuse.org/?p=1543

what is not known, is that zoster sine herpete (shingles without rash) is more painful and lasts longer that that with rash 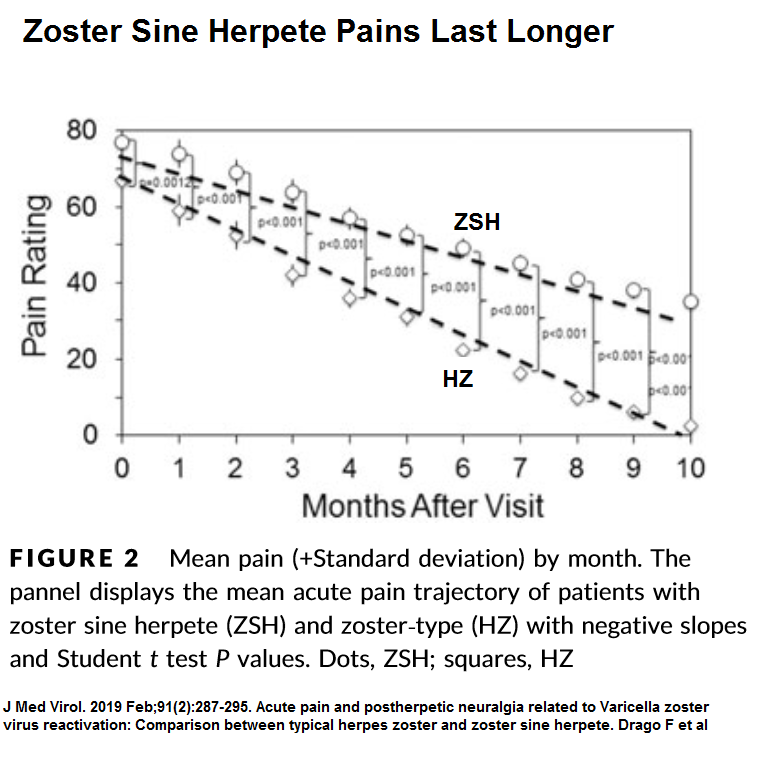 Just one tip re injecting tenderized areas in herpes zoster – there is a whole zone near the midline of the back from the back dorsal nerve roots. -higher up levels have the roots come out near the spinous process and can be hit there – otherwise further out.

This entry was posted in Neck, radiculitis, shoulder, Uncategorized. Bookmark the permalink.