6-8 years ago a brief neuralgic pain in the scalp that radiated to front or back of head was described. I wrote about it here:
http://painmuse.org/?p=1516

Now a facially originated version has been defined and sounds very much like trigeminal neuralgia except it shots up or down the face. The same superior cerebral artery compression was found on MRI as you see in Trigeminal neuralgia. 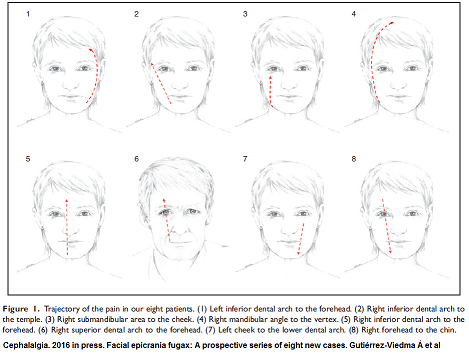 “Eslicarbazepine acetate is a new anti-epileptic from the same chemical family as carbamazepine and oxcarbazepine. This pro-drug is rapidly converted to active metabolites that stabilize the inactivated state of voltage-gated sodium channels, preventing their return to the activated state and thereby sustaining repetitive neuronal firing. Based on its similarities with carbamazepine and oxcarbazepine, eslicarbazepine is currently being assessed for the treatment of neuropathic pain, including diabetic neuropathic pain and postherpetic neuralgia. One case report in the literature stated that eslicarbazepine was an effective alternative to carbamazepine in trigeminal neuralgia. Likewise, eslicarbazepine might be useful for other headache disorders responsive to anti-epileptic drugs.”

One case epicrania fugax responded to carbamazepine 200 mg qid but made subject too drowsy but was controlled on Eslicarbazepine acetate initially 800 mg/day and titrated to 1600 mg/day.

This entry was posted in Drugs, neuropathic, Trigeminal Neuralgia, Uncategorized. Bookmark the permalink.