Listened to talk by Dr. Anthony Kaufman.He does probably the largest amount of Trigeminal nerve microvascular decompressions in Canada (~50/year) and helps run the Winnipeg Centre for Gamma Knife Surgery.
He has a web site with detailed descriptions here
Here are some points made:
1) Defined as sharp severe instantaneous jabs on one side of face.
Takes several years to diagnose and efforts often misdirected

Psychiatric – hard to believe could be considered such but I had a patient with glossopharyngeal neuralgia (jabs in neck when swallow) spend time in a psychiatric ward before she saw me and was put on Tegretol (language difficulties).

2) Cause primarily vascular irritation (90%) from nearby pulsing vessel. MS and trauma are two other frequent causes. Triggering events include dental work or facial injury in 1/3 cases.
3) Some cases have a component of atypical facial pain – constant achy component. This might amount to a neuralgia – severe form of constant pain or atypical facial pain – a poorly understood lesser pain. Given that this group has a neuropathic (nerve damage) component, they do not do well with procedures that damage the nerve more.

4)Investigation involves plain MRI (dye enhanced only for MS or tumor cases). 90% of time can see compressing blood vessel. 5%+ time small vessels not seen. One can do CISS sequence procedure to do millimeter slices of area on film.

5) Medications include Tegretol (Carbamazepine) – useful and cheap so used first but most have some side effects from (drowsy, drugged, unsteady). Neurontin (gabapentin), Dilantin, and Lyrica are alternatives. I asked re oxycarbamazepine (Trileptal) which is a type of tegretol with less side effects. It is expensive and like our Saskatchewan plan, the Manitoba plan will not cover it. Baclofen, a central acting muscle relaxant used in MS etc., is sometimes used but only as an add-on. Adding two drugs otherwise is NOT worth-while and doctors are discouraged from attempting it and it just multiples the side effects. Medications will only worth 1/2 of time. More description here

Drugs used as described by:

Gabapentin (Neurontin) – half the efficacy of carbamazepine but more tolerable. Start with 100 mg three times daily and increase by 300 mg every 3rd day up to 2700 mg/day

Baclofen is started at 5 mg three times/day and increase by 10 mg EOD until 20 mg three times daily. Used more as add-on – efficacy disappears in 20% of responders.

Lamotrigine “started at 25 mg twice daily and increased slowly by 100 mg/d every 1 to 2 weeks, aiming for a daily dosage of 100 to 400 mg divided twice daily.” – found to help in a 14 case crossover study not relieved by carbamazepine and dilantin.

Topiramate “started at 25 mg twice daily, and the daily dosage may be increased by 25 mg every 3 days as tolerated to 100 to 400 mg divided twicedaily.” – promise in two pilot studies
“Sodium divalproex, clonazepam, and tizanidine have demonstrated at least limited efficacy in several small series.”
———

Other invasive techniques are discussed here

6) One alternatives includes various destructive nerve techniques . At their centre, they favour Percutaneous Balloon Compression Rhizotomy for destructive techniques. – A wired is fed up to the trigeminal nerve ganglion and a balloon inflated for one minute. Glycerol injection and radiofrequency denaturation are alternative destructive techniques. 10% are left with an unpleasant feeling in the face and a small proportion actually have pain there. About 50% will get full recurrence of pain, often within several years. Whatever the approach, medications work better on these recurrences that they did prior to surgery.
7) Gamma Knife surgery is an alternative that is becoming very popular because it is easy to do but the long term results are no better. 30% will end up with excellent results. 50% will need additional meds or another procedure after 3 years or so. Destructive effects of radiation may not become apparent for a year with progressive numbness.
8) Microvascular decompression – opening up area behind ear, lifting blood vessel from nerve, putting 6 tufts of teflon fibers between blood vessel and nerve. Although in one breath mentioned there were minimal side effects, did say side effects varied with how many procedures were done per year. Some of the sites doing surgery were Vancouver (24/yr), Calgary(11/yr), Edmonton (7/yr.), Winnipeg (over 50/year), and eastern Canada sites including Toronto, London-Ont., Mon?, and Halifax. Winnipeg did more procedures than anywhere else. Had one small recovered stroke and that was it – although 10% can gain some lifelong unpleasant feeling in face. Relief rates drop to 75% with time and 10% need more surgery.

9) Odd as it might seem, cases of prior surgery often do well with re-surgery, something he is in the process of publishing.

What else can you do?

Injection of neurolytic strengths of local anesthetic can give some lasting benefit:

The management of trigeminal neuralgia in older patients who do not want neurolytic block and/or surgical treatment may be problematic. This paper describes three patients who had first and/or second division trigeminal neuralgia. The analgesic effects of infraorbital nerve block using 0.5% bupivacaine or 1% mepivacaine dissipated within a few days, however, the effects of nerve blocks using 4% tetracaine dissolved in 0.5% bupivacaine continued for more than 3 months. Hypesthesia was observed in two patients within a week following the block, but sensory level returned to normal within 2 weeks and there were no further complications in any patient.

OBJECTIVE: This study examined the effects of peripheral nerve block with high-concentration tetracaine for the management of trigeminal neuralgia, and evaluated sensory function by measuring the postblock current perception threshold.
METHODS: Five infraorbital nerve blocks were performed in five elderly patients using 4% tetracaine dissolved in saline or 0.5% bupivacaine. The authors used a neurometer to compare postblock current perception threshold between the block side and the contralateral healthy side, and used cold tests to assess the sensory level.
RESULTS: The analgesic effect of tetracaine blocks continued for a median period of 2 months (range, 1.5-months). Hypesthesia was observed in all patients after the block but resolved within a mean period of 2.2 weeks. Although differences in current perception threshold values between sides were not significant in any patient, block-side values in two patients were clinically higher than contralateral-side values (250 vs. 5 Hz) for some time before returning to normal levels.
CONCLUSION: Peripheral nerve block with high-concentration tetracaine is a relatively safe and useful technique in the management of trigeminal neuralgia, particularly among older patients and those with systemic problems.

You can get 20 mg Tetracaine powder for reconstitution. I dissolve it in o.5 mls spinal 5% lidocaine which makes it 4% tetracaine and 5% lidocaine.

5% liodocaine has neurolytic effects as well:

For mid- facial neuralgia, the infraorbital nerve can be injected. It can be found: 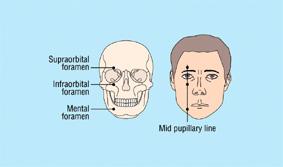 Inject ON foramen not in. (Warning – intravascular injection could be hazardous and procedure best done in a hospital setting). Pulling back on syringe to see if in blood vessel is NOT reliable.

The mental block though I see it too is vertically in pupil line.

You might be abole to feel foramen and as you hit it, patient will let you know it’s sore..

Quite some years ago now, I used neurolytical local on a desperate elderly gentleman – worked so well had it repeated once and has been managed on minimal medication since.

There are some cases where there is an intraoral tic triggering zone. Putting medication under a plastic shield can have real benefits. 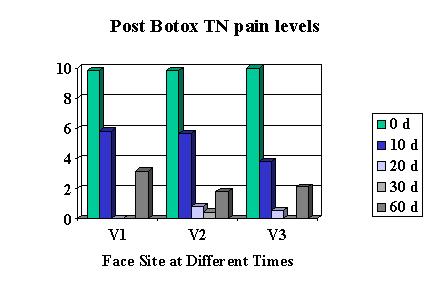 Basically it gave relief in 10 days and lasted over 60 days.100 units is $400; using about 1/10 that would be theorically $40.00 but you would need 10 patients lined up to use it all… The injection is intradermal – blebbed up in the skin so skin goes white as injected. – multiple sites. Now only if Botox would come out with the 50 unit vial they promised…

There is another form of botulinum: “The relative potency of BOTOX® units to Dysport units is approximately 1:4” ref here
Have used it on one patient with benefit – lasts 12 weeks to the day and then comes violently back. Make sure you have plans to give a repeat at 8-10 weeks to avoid that.

Another study used much more Botox:

Another study using the alternate form of botulinum used a vaery small dose:

Botulinum toxin is a well-known therapy for patients with diverse movement disorders. Its application has been extended to other disorders. Here, we document the case of a 70-year-old man with hemifacial spasm associated to trigeminal neuralgia secondary to an ectatic basilar artery. He was treated with botulinum toxin type A, 2.5 mouse units over five sites at the orbicularis oculi and one over the buccinator muscle. After botulinum toxin injections, relief was gained not only from twitching but also from pain. When the effects of the toxin vanished, spasms and pain recurred. Further infiltrations were given every 12 weeks following the same response pattern. This observation further validates the increasing role of botulinum toxin in pain management.

Another study confirmed its benefit especially if associated with hemifacial spasms:

Rev Neurol. 2006 Jun 16-30;42(12):729-32.
Painful tic convulsif and Botulinum toxin
Boscá-Blasco ME, Burguera-Hernández JA, Roig-Morata S, Martínez-Torres I.
INTRODUCTION: Painful tic convulsif is a rare disorder that associates trigeminal neuralgia (TN) and ipsilateral hemifacial spasm (HFS). These two disorders are the most common examples of hyperactive cranial rhizopathy and are frequently caused by vascular compression of these cranial nerves at the nerve root entry and exit zone in the brain stem, which leads to paroxysmal ephaptic transmission. CASE REPORTS: We report the cases of four patients with combined TN and HFS out of a total of 247 patients with HFS who were treated with botulinum toxin. One patient had TN that was contralateral to the HFS, while the other three were ipsilateral, and one of these had bilateral HFS. In all four cases both the HFS and the TN improved with botulinum toxin treatment.
CONCLUSIONS: These four patients with TN and HFS suggest a common aetiology for the two disorders, due either to central neuronal hyperactivity or to vascular compression of several cranial nerves. The beneficial effect of botulinum toxin in both disorders supports the idea of this toxin having a central mechanism of action that acts by controlling neuronal hyperactivity in the brain stem, as well as its peripheral action.

My Conclusion – Botox works and if one can figure out how to give a small amount economically (?leftovers) then could be cost-effective but must be given every 2-3 months

“0.2 ml of lidocaine 8% applied to the sphenopalatine ganglion, which lies just posterior to the middle turbinate, provides effective pain relief for approximately 4 h.”

from: Trigeminal Neuralgia: Diagnosis and Treatment
William P. Cheshire,
Current Neurology and Neuroscience Reports 2005, 5:79–85
Usually a full loading dose of 14 mg/kg is required. Pain relief lasts 1 to 2 days, during which time
oral medication can be initiated and titrated, or arrangements can be initiated for surgical treatment.

3) Topical lidocaine (ibid Cheshire)
“Lidocaine, applied transcutaneously as a patch or intraorally in the form of viscous gel, or ophthalmic
instillation of 0.5% proxymetacaine drops, also may provide temporary relief”

Given that there is no Xylocaine patch in Canada, that means making up 5-10% lidocaine in lipoderm (Do not use PLO gel – will irritate the face too much)

4) Has suggested an anesthetist may need to be called to give ketamine & fentanyl until relief is achieved.

I found my semineurolytic injection into infraorbital and mental nerve did not help one pateint that continued to have pain lateral to his lip. I now realize ther is a third lower facial sensory nerve: 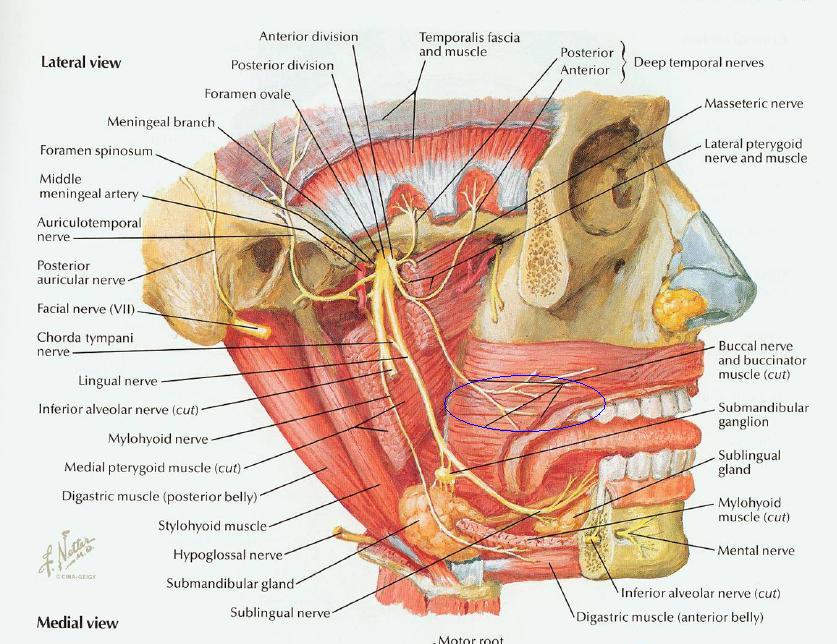 This entry was posted in Trigeminal Neuralgia. Bookmark the permalink.