Protocol from Anodyne Headache and Pain Care in Texas gave 0.3 mg – 0.4 mg/kg ketamine divided into 3 deltoid IM shots separated by 15 minutes for headache and neuropathic pain.  A remarkably successful ketamine IV treatment for depression gave 0.5 mg/kg iv over 1oo minutes. Could they be different flavours of the same thing? 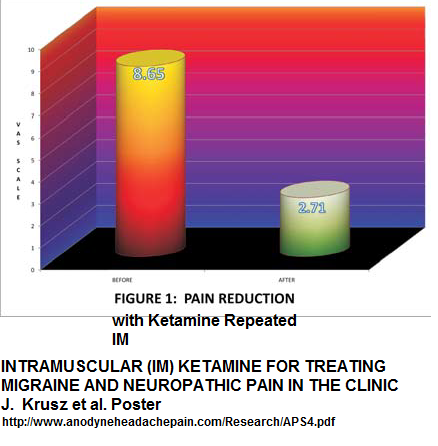 Comment – I have been giving 10 mg ketamine IM deltoid x2 for chronic pain and x3 for chronic pain and significant depression. If on high dose opioids, elderly, or small, dose is reduce to half that. It will reduce pain by 2-3 points for 3 days and significantly improve mood. Many will say the pain comes back up the 3rd day but they don’t care because their mood is still buoyed. Any severely depressed patient is given ketamine, given that it has been shown to prevent suicide:
Int J Neuropsychopharmacol. 2011 Sep;14(8):1127-31.
A preliminary naturalistic study of low-dose ketamine for depression and suicide ideation in the emergency department.
Larkin GL, Beautrais AL
http://www.ncbi.nlm.nih.gov/pubmed/21557878

Major concern with IV ketamine has been the derealization syndrome where people feel alarmingly unreal and panicy – IV Midazolam has been used to treat (and is some cases prevent it). Never saw it with IM injectable because if they start feeling odd, they just elect not to have another dose.

Recent had a case with OCD (removes it for 3 days as well.

Rodriguez, Carolyn I., et al.
Rapid resolution of obsessions after an infusion of intravenous ketamine in a patient with treatment-resistant obsessive-compulsive disorder.
The Journal of clinical psychiatry 72.4 (2011): 567-569.
http://www.psychiatrist.com/jcp/article/Pages/2011/v72n04/v72n0420.aspx

She  was better on 1 dose treatment but felt unsettled on 2 doses so elected to not have anymore – OCD had settled some and was not depressed.

I found out one subject on ketamine had a delusional state (thought she ran someone over) but I believe it predated the ketamine.

– a rat model for ketamine use came up with this observation: “When acute ketamine was administered to rats under chronic morphine treatment, the brain concentrations of morphine, ketamine and norketamine were increased compared with the situation where either morphine treatment or acute ketamine were administered alone. There sults indicate a potentially beneficial pharmacokinetic interaction between the two drugs…Ketamine, a drug used for the treatment of opioid tolerance in cancer patients, may undergo previously unrecognized beneficial pharmacokinetic interactions with morphine.”