I have published on the use of ketamine to treat pain/depression/suicidality. Now a weak painkiller / partial painkiller blocker has been shown to help depression, not with one study, but with findings from twelve studies.

Blocking kappa receptors has been found to bring back motivation in pain:

I will comment on the studies but not with opioid addicted subjects: 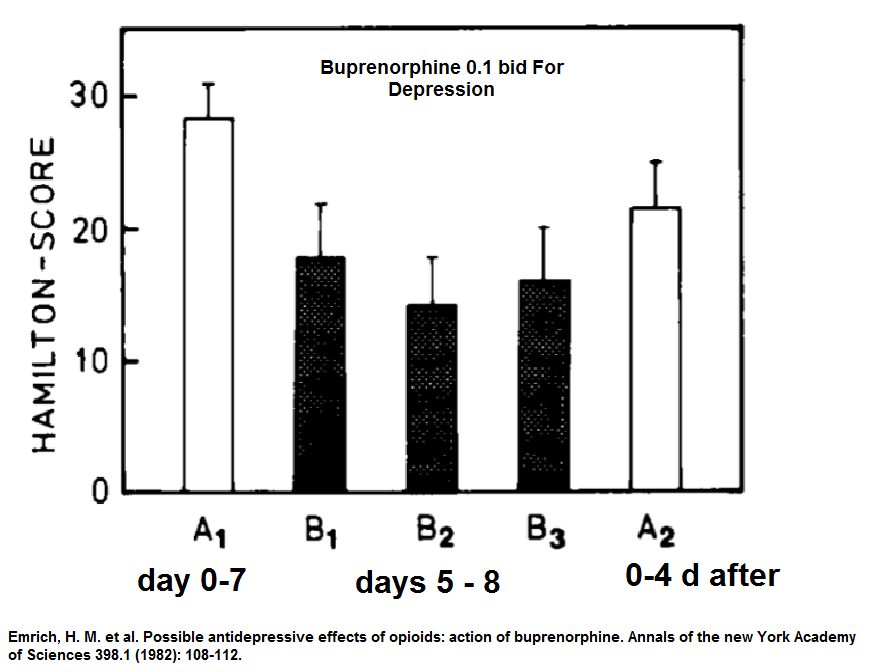 used average of 1.3 mg/day though in opioid abusers was 2-18 mg/day
noted rapid onset – most within 1 week
did not feel intoxicated or euphoric – just “more normal”
1/3 felt it was unpleasant and stopped taking it, while another 1/3 stopped at 4 weeks despite fact it helped

responders got “marked response” suggested tho them some abnormality of endogenous opioid system
referenced a study finding ninefold increase in opioid receptors in suicide victims.
“This finding may suggest that opioid receptor up-‐regulation may be occurring in this very treatment refractory population because of a deficit of endogenous opioid neurotransmitter availability”.
Gross-‐Isseroff R, Dillon KA, Israli M, Biegon A. Regionally selective increases in opioid receptor density in the brains of suicide victims. Brain Res 1990;530:312-‐6.

bemoans the fact no one has run with the fact that the agent can quickly remit depression “most patients… within hours”.  They had 5 cases that were followed for several years with maintained good results. They found any lethargy from the pill responded to methylphenidate or dexedrine.

No one picked up on it and it remained an orphan…

Most interesting, was a letter, using it in ECT refractory cases:
Nyhuis, Peter W. et al (from Germany)
Opiate treatment in depression refractory to antidepressants and electroconvulsive therapy.
Journal of clinical psychopharmacology 28.5 (2008): 593-595.
https://www.ncbi.nlm.nih.gov/pubmed/18794671 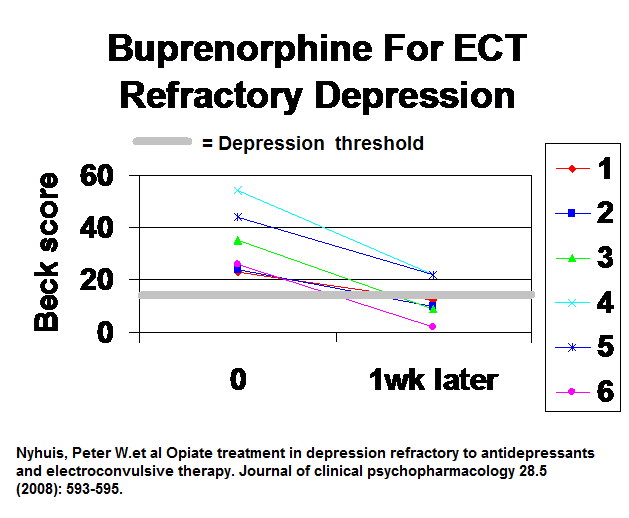 Within 1 week,  4/6 were below depression threshold

side effects included nausea, constipation, sedation, dizziness and sweating but not bad enough for any to stop treatment. – they felt they were mild, dose dependent and transient.

Given that doses used for pain went up to 16 mg, that the dose was trivial.

suggested that “a specific role of the endogenous opioid system” in a subgroup of patients.

They called it ,with tongue in cheek I suspect, “the Bopium cure”

In the last few years some real studies have been done: 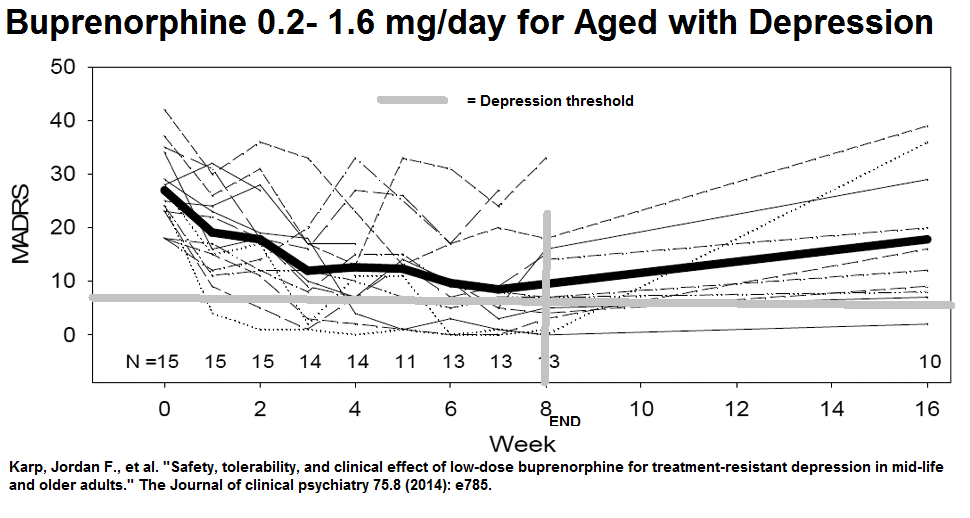 So started out with moderate and ended with mild but evidence of rebound some once off meds. They felt “the antidepressant benefits of low-dose buprenorphine may require long-term dosing to be sustained.” 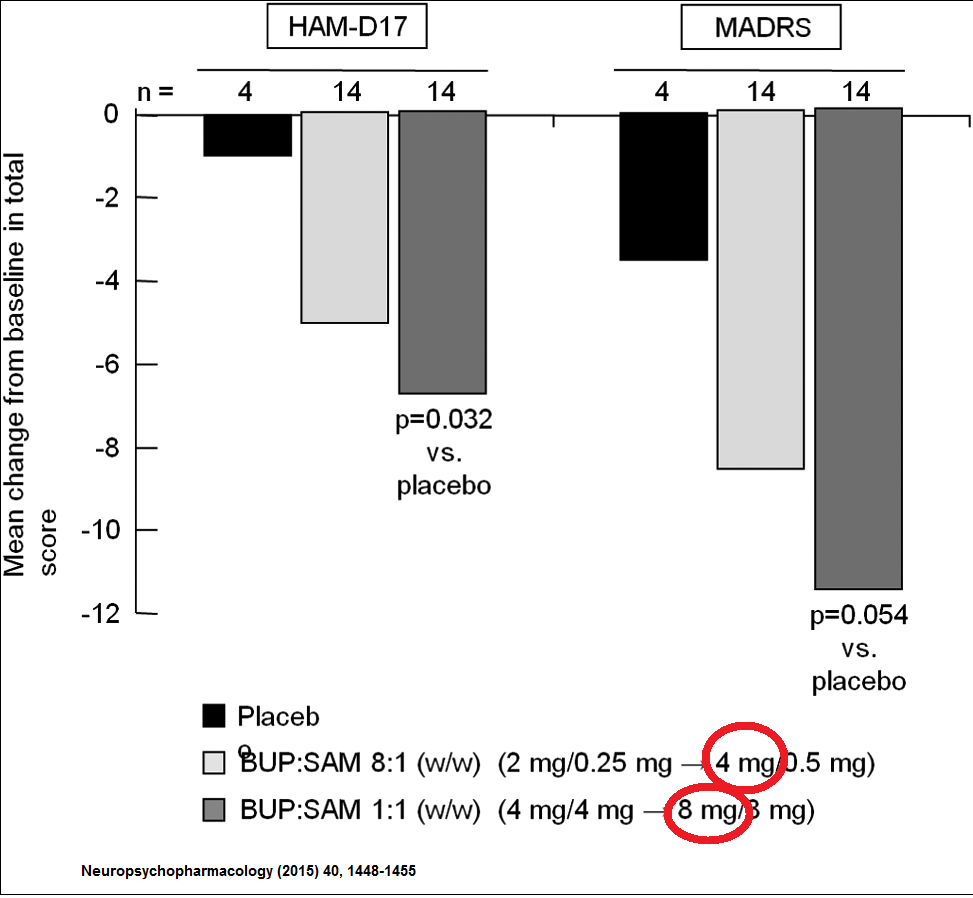 However if you proportion results at 25 and scale them down % wise for each it looks different. – They both dropped the same percent – the 8 mg was more down because they started out bit more depressed. So not convinced 4 mg+ was better than 8 mg+. 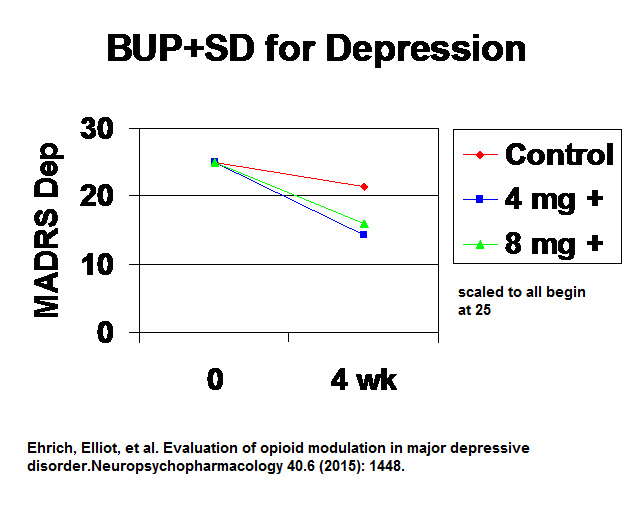 If you look at previous study using MADRS depression scale, you see pain scale continued down to 10 by week 7 – just 3 above 7 = no depression

Did a fancy technique to remove placebo responders and came out with this using MADRS depression scale (<7 no depression; 7-19 mild; 20-34 moderate) 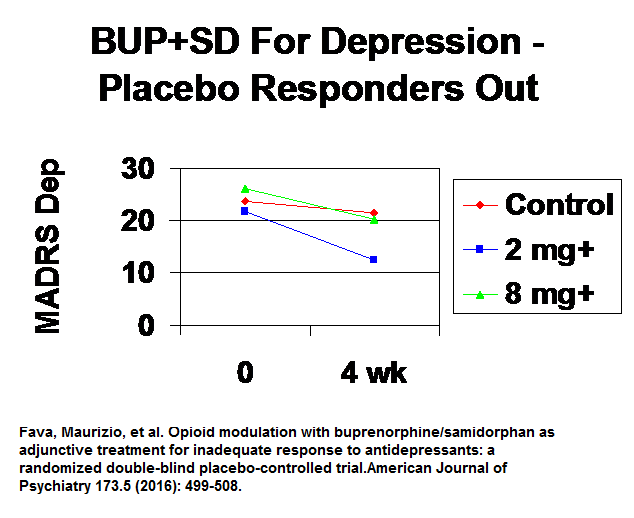 This suggested the lower dose was better – started out moderate and ended up mild.

They found ” this compares favorably with results from a meta-analysis of 14 studies with atypical  antipsychotics as adjunctive therapy for major depression”. – a viable treatment option then.

side effects were nausea, vomiting, and dizziness – which would be worse in the 8 mg+ group and might have blunted its efficacy. These side effects were worse the first few days and one wonders if an anti-emetic should be used initially until people get used to them after day 3.

No effect on depression but did find that suicidality decreased significantly in BUP group.

Comments  – this was one of the most arduous efforts I have had to do. Studies with poor results overplayed their stats and made articles unreadable. However, some things do stand out:

NOTE – PHARMACY HAS MADE IT CLEAR BELBUCA NEEDS TO BE STARTED AT THE LOWEST DOSE – 0.075 MG OD AND ONLY WORK UP AFTER 4 DAYS.

addendum – had a case with severe depression age 65. Already on large doses venlafaxine. Has some chronic pain issues but not wanted painkillers. Has drug coverage so started butrans 10 1/wk (equivalent to 0.4 mg/day). After 1 week is beck 14 = borderline so am impressed. He changes patch slightly before 1 week because pains start coming back. Plan would be to keep on butrans 10 as near zero addiction potential and less pain probably helps quality of life – there is some recurrence of depression at 20 wks if stopped at 12. He was obviously a responder and he noted effects within 1 day. Good responders like that are maybe 1/3 cases.

Any experiences would be appreciated.

This entry was posted in Depression, Drugs, pain mechanisms. Bookmark the permalink.

One Response to Using the Pain System to Treat Depression – Buprenorphine