Example of poor enzymatic function in mitochondria in FM: 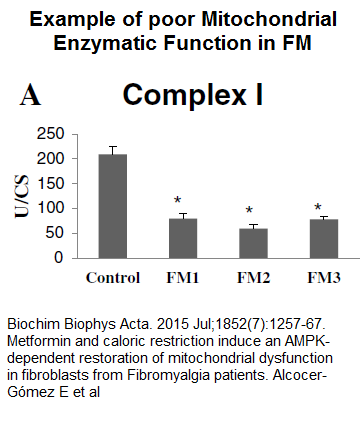 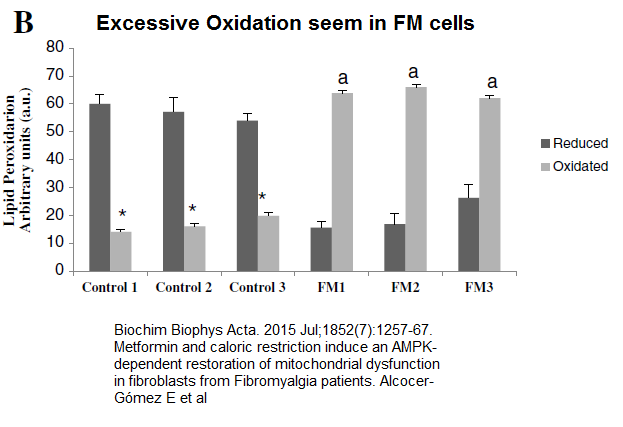 Without control of free radicals, cells in FM are more susceptible to sickness and death- example of sensitivity to peroxide (H2O2) leading to cell death versus controls  – seen below as increased risk but benefits from  metformin: 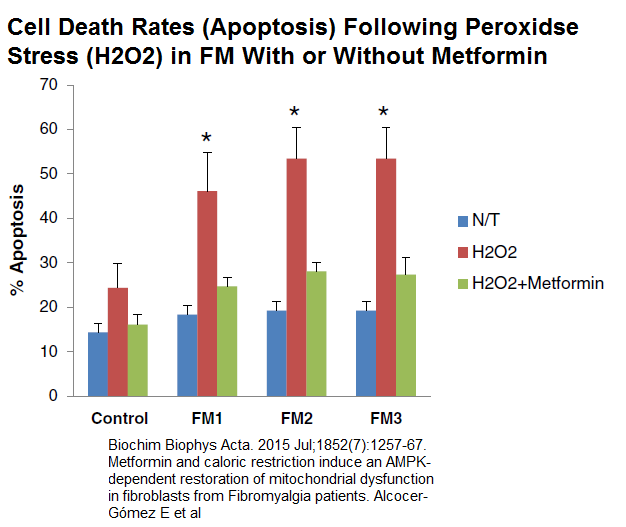 Comment – implications are that weight loss and metformin could be beneficial in FM. What was not done, is metformin given to FM subjects to see what effects their could be. Mitochondrial disease has been implicated in FM for some time. There is good evidence that mitochondrial disease is related to depression (certain depressions inherited from mother as mother passes mitochondria to offspring) – Bipolar particularly – and there is evidence that 1/4 FM subjects are bipolar:
Wilke, William S., Carmen E. Gota, and David J. Muzina.
Fibromyalgia and bipolar disorder: a potential problem?.
Bipolar disorders 12.5 (2010): 514-520.
http://www.ncbi.nlm.nih.gov/pubmed/20712752

This heightens need to treat any depression seriously but also consider FM a metabolic disease. Metformin is an interesting agent as it is shown to help prevent and slow down  certain cancers and would not be bad to take. FM is becoming more legit!

Practical case – 25 year old with bipolar and fibromyalgia. Obese and told could not have hip labral tear surgery unless lost weight. I put her on metformin 1 gm twice daily because it sometimes helps people lose weight. She noticed her pains dropped by 2/10 points but thought maybe it was due to the fact she was losing weight – it might have been both the weight loss and metformin. She also noted her bipolar disease improved and she had less hypomanic attacks. I am convinced that those with fibromyalgia and hereditary depression are quite likely to benefit from metformin and another metabolic stimulator – B12 which when given to people with more neurogenic chronic pain can drop pain 20% as well – but works best, at least initially, 1000 ug subcut daily for 2 weeks officielgoldengoose officielgoldengoose

This entry was posted in Depression, Drugs, Fibromyalgia. Bookmark the permalink.