Back Pain Worsening? – Look For Back Pain Multipliers – They Are Treatable.

I think it might be best if I eaplained my case and put it all together as I go along.

Being frugal, I wore a heavy laden fany pack while flying to visit my daughter. I also wore a belt and of course had the seat belt on in the airplane. By the next day my bilateral low back was in spasm and I couldn’t straighten up properly. I spend a great deal of time manually working out quadratus lumborum muscles in my office – and went to work on mine and found my right iliac crest was sore as well – more anteriorly than posteriorly. It appeared all those belts had damaged some anterior iliac crest cluneal nerves -especially iliohypogastric (T12, L1) 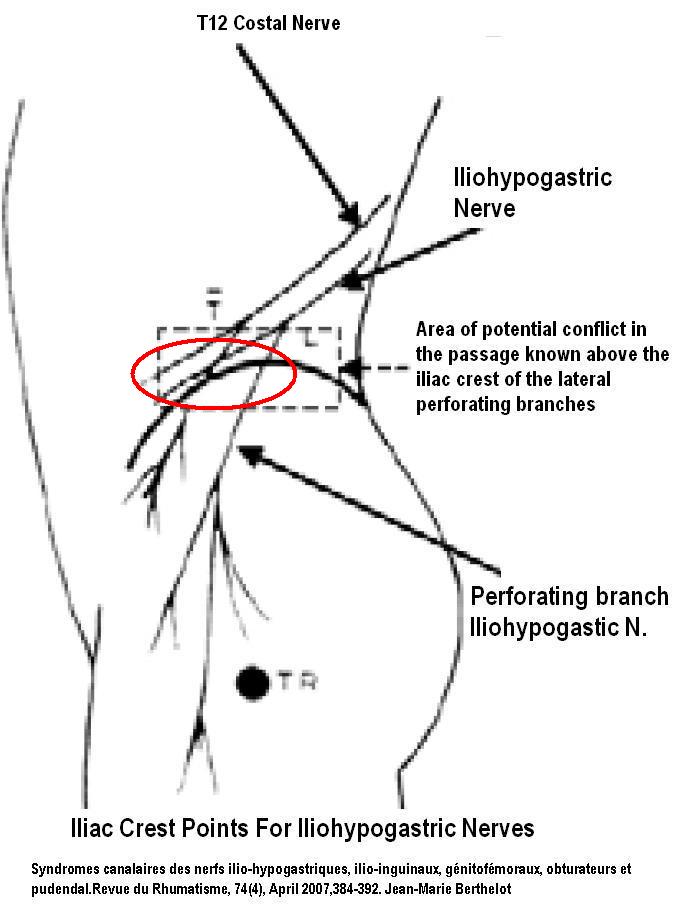 Given the iliopsoas is innervated by L1,2 as well, I guess it was in spasm because the same nerve root level had been irratated elsewhere. The psoas spasm was intense – McKenzie style stretches were not effective and put strain on my L5/S1 facet joint which I could feel hard packing and starting to give a deep catching pain.  I was motivated to get working on this as I know how bad facet joint issues can be – and how they reflexively tighten up the lower paraspinous and deep multifidi to keep things hard packed – fueling more pain

With disc disease, the area tightens up and facet joint have been shown involved – particularly in large disc issues.  Tighening of the psoas, paraspinous and deep lower quadratus lumborum help keep it that way.

As well as the Iliopsoas, it’s partner muscle, the Quadratus lumborum (QL) tightens up – and I found particularly the inner 2 inches + 5 cm area becomes very spastic (my hands are quite strong from the manual therapy I do and I could feel the innermost quadratus lumborum close to the spine being very tight. – I pinch the flank – thumb in front and work my fingers in.   A spot off the side of L2-3 transverse process I feel if the cornerstone/ linchpin for problems. I believe that the lumbosacral plexus that traverses between the spastic QL and psoas –  becomes irritated and is a multiplier of pain:

The Quadratus lumborum is innervated by T12 and L1-4 s0 not surprizingly, anything that irritates iliopsoas will irritate it as well. 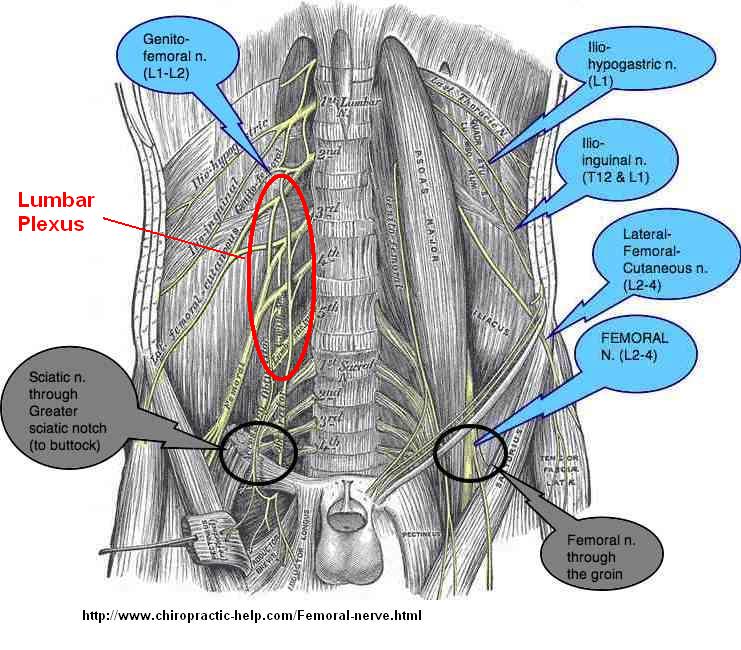 The side with the psaos muscle intact – you can see it is underneath it and on the QL (Looking on side with psoas removed).

I will pinch between that area front and back and with freee hand then  press in with a thumb saver on my index finger just on the edge side of where I am pressing.

I, for example, will press just  – near the tip of my thumb – pressing in near L2/3 transverse process edge. At the same time I will shake the tissues perhap 200 times in the hope the tissues will loosen up. Then, I will press near the ends of my fingers in the abdominal flank near l2/3 and shale it 200 times as well – both these measures are very painful and you will probably be convinced there is no chance it would let go – but it sometimes does. For those where it does not give, I inject with small doses of 5% lidocaine (0.5 ml+) into trigger area to knock out nerves locally and retry maneuvers.

The L2 level has had special importance in several studies:

The area by L3 has been popular in past:

In 2000, a study was done injecting either methylprednisone 80 ml   or botulinum  100 unit ( either with 2 ml 0.5% bupivacaine and 2 mls saline = 4 ml) into L3 psoas for chronic back pain(unfortunately did scalene injection in neck and blended results) 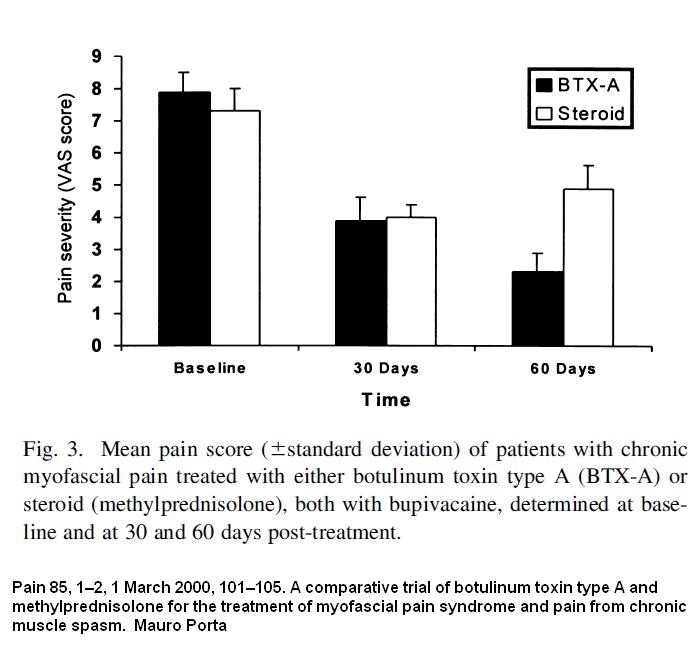 Pain 85, 1–2, 1 March 2000, 101–105
A comparative trial of botulinum toxin type A and methylprednisolone for the treatment of myofascial pain syndrome and pain from chronic muscle spasm
Mauro Porta
http://www.sciencedirect.com/science/article/pii/S030439599900264X 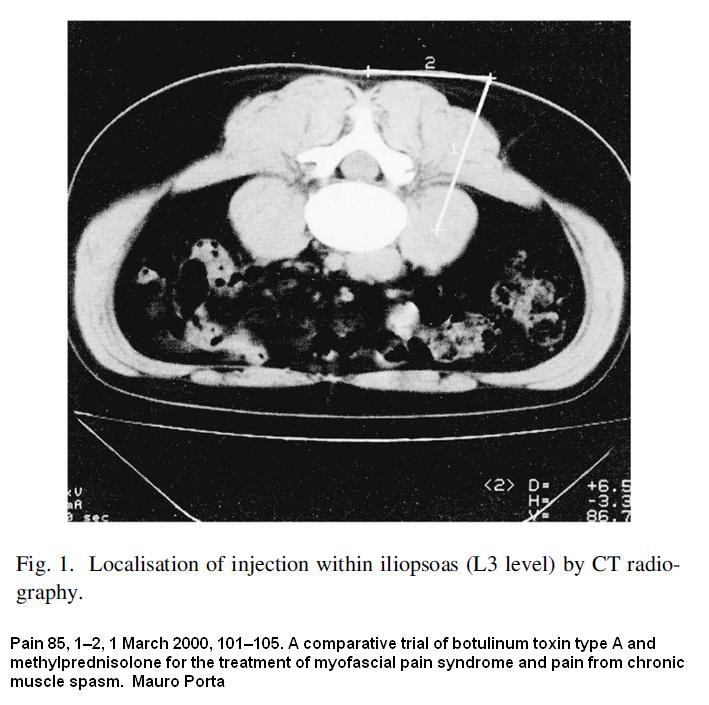 Finally, there was a study of L2 nerve block in chronic back pains:

The Chinese are very interested in L3 and call it the Third Lumbar Transverse Process Syndrome:

They felt they got a 50% “cure” rate with Botox starting after 4 days and lasting longer than acupuncture.  I have used botox on one case and found it helpful – though working muscles was still necessary.

With spasm of quadratus lumborum, the ribs very quickly descended below the level of iliac crest (prior 2-3 fingers space). This would irritate the cluneal nerve that come across iliac crest (worst spot 1/2 way out). Lower ribs would get sore from rubbing as well . The very superficial muscles also tightened up and just running a finger deeply along iliac crest midline back out to flank- to strip the muscles would loosen things up surprisingly. Again it is the QL close to spine that is one bad area. 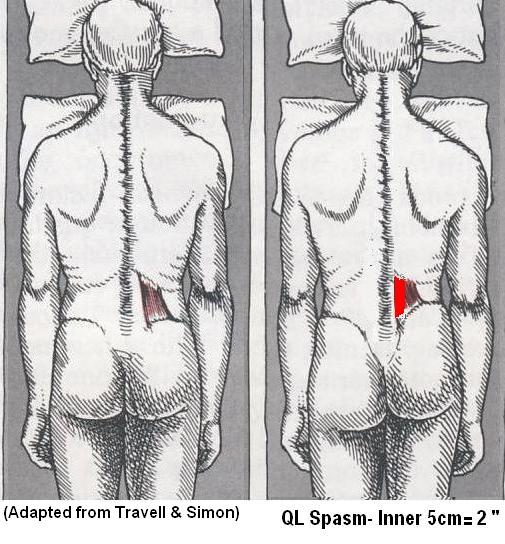 Almost anything can flare it up – the arms on my chair rubbed on them. The sinking of your pelvis while on your side will cause the upright side to rub when side sleeping. Sleeping on the back is recommended. One of my difficult patients slept in a recliner chair for several weeks and got the iliac crest irritability down that way.

Pains are neuralgically sharp ar times and a definite pain multiplier. One patient found with his arm propped in the window driving, he was sidebent enough to get into trouble. Sitting on a low chair is trouble and needs to be avoided. Bending down to reach for things would be a problem and being on the toilet hard to even wipe.

Sidebending stretches are a no-no. If you lie on back – put your hand spread over iliac crests with thumbs in front – then push sides down to toes – can induce great comfort.

Wearing a belt hurt too much.  Tried a rib belt but just caused heartburn.  Suspenders bothered my shoulders.  I settled for either stretch pants (hence no belt) or a small towel put in pants to pad where iliac crest was.

Initially, you may not be able to get fingers in between ribs and iliac crest – pinch flank and shake it back and forth until release  – helps to use thumb saver technique discussed above.

The second area that is very tight is seen when body is twisted as per pic stretch. This is a QL stretch but must involve oblique abdominal muscles as well. Patients find this almost too much to do but when it releases, there is profound relief

Once there is space, some improvement will occur but often tender areas need injection with local and small amounts of steroid – I did.

Multiple muscles in my back tightened up – posterior inferior serratus  iliocostalis, and paraspinous muscles were worst. .  Had to work them alot….Started by putting hand below serratus posterior inferior and push up – can feel fibers give way as do that. After, take hand and rub knuckles back and forth over area until lets go. Paraspinous I injected lateral edge with 5% lidocaine and massaged out 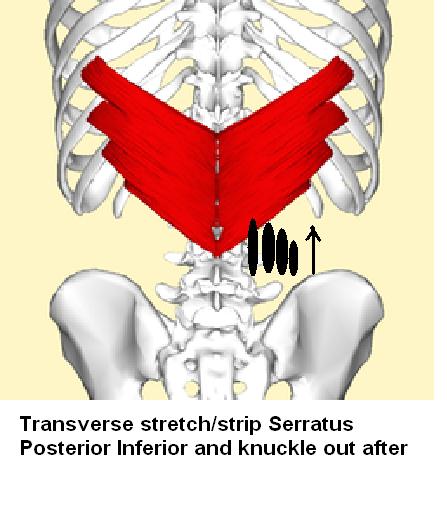 This problem caused ribs to catch in a minor fashion – not your typical catching rib – it is higher up and not positive on rib lift test.  You will find multiple tender rib spots  – I injected with small amounts 5% lidocaine with 30 gauge needle (minimize pneumothorax) and it is surprising how much better they will be in few days. Rib catching is more annoying then anything – zings enough to stop you from being active. – Is not as bad as the iliac crest impingement though. Patients won’t even tell you about them as they just zing momentarily…you have to ask if their rib levels will zing pains with certain trick movements.

T11 area was particularly bad and pressing firmly with thumb will make patient jump. Working paraspinous as mentioned above and using activator on facet joint helped.

This entry was posted in Back Pain, Botox, neuropathic. Bookmark the permalink.

3 Responses to Back Pain Worsening? – Look For Back Pain Multipliers – They Are Treatable.