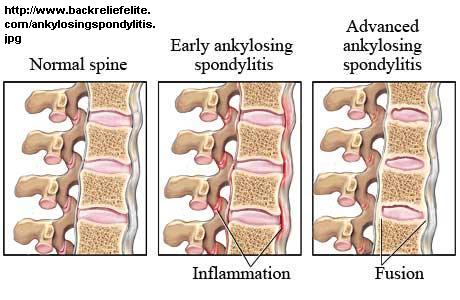 A recent study found doctors had a poor knowledge of the features of Ankylosing Spondylitis (AS) which is why only 6% of women with this disease are properly diagnosed by GP’s. This will mean women with active spinal arthritis might have to wait 7 years to be diagnosed. Men with concomitant back injuries can suffer the same fate

Up to 11 Years to Diagnose

Part of the reason is GP’s have poor training in what are features of the disease (you only see what you know):
Below is a study that found Doctors had poor recall of AS features:
Rheumatology (Oxford). 2008 Jun 24. [Epub ahead of print] Recognition of inflammatory back pain and ankylosing spondylitis in primary care. Jois RN, Macgregor AJ, Gaffney K.

AS FACTS
AS is a spinal arthritis which often affects young people. It can cause persistent “insidious” back pain – comes with no reason and persists. The “give away” is the morning stiffness – it can take let say 30 + minutes to get the soreness improved by moving around. This concept is not well understood by some patients who say they are stiff all day; stiffness is a finding that works its way out by activity. Undiagnosed, not only do these people suffer unnecessarily, they are not offered medications that can prevent progression of the disease – Entanercept – Enbrel. – tumor necrosis factor(TNF) inhibitors.

WCB MISSED CASES
People who are really disadvantaged are those who have concomitant (at same time) back injuries. I have seen two young men with WCB discogenic back injuries who never got better. WCB was on their case for non-resolution. Recognition and treatment of the AS gives some relief but there is still some disc disease. However, this would give WCB the excuse to axe their cases. The only thing that works to their advantage here is that rheumatologists in this province seem to be unable to make that diagnosis without imaging evidence of sacroilitis. This can take 10 – 20 years to show so one can say there is no hard evidence (so there is doubt…).

The argument is made that these back-injured WCB cases developed AS before the average onset of the disease and hence the injury precipitated the early onset of AS.
In:

I had a patient who wanted to claim the injuries prematurely brought on the AS – you would have to be significantly earlier than the average age to even make a case.

WOMAN WORSE OFF
Woman are worse off because the joints first affected are the sacroiliac joints. These joints are often too mobile in women – part hormonal, and definitely related to childbirth. So they endure low back pain for years thinking it is just the SI joints. By the time they were so bad off that they were referred to a rheumatologist, about 50% of men had been diagnosed, but only 6% of woman had been. Why were they sent to a rheumatologist? – because they have “Fibromyalgia”. One McGill study found many people referred for Fibromyalgia actually had subclinical rheumatic disease:
Rheumatology (Oxford). 2003 Feb;42(2):263-7. Inaccuracy in the diagnosis of fibromyalgia syndrome: analysis of referrals. Fitzcharles MA, Boulos P. abstract here

“At the final evaluation the accuracy of the diagnosis regarding FM by either the referring physician or by the rheumatologist at the time of the initial visit was correct in 34% of patients.”

The majority were early stages of rheumatic diseases (including AS). Not surprizingly, they found “prolonged early morning stiffness and limitation of lumbar spinal mobility in more than one plane was more common in the non-FM group”

Features that reflect AS include:

Most frequently scored enthesis points at baseline, at one year follow up, and at two year follow up in order of detection during the data reduction process. Heuft-Dorenbosch, L.,2003

These tests could be worse than useless – a negative test, if considered adequate to Rule out AS, would eliminate even the average AS. ESR N= 0-20 so they would be normal in AS; CRP level normally range from 0-5 so actually seems much more sensitive.

Rheumatologists can be as bad as GP’s

I will repeat this for emphasis:
Rheumatology (Oxford). 2003 Feb;42(2):263-7. Inaccuracy in the diagnosis of fibromyalgia syndrome: analysis of referrals. Fitzcharles MA, Boulos P. abstract here”
At the final evaluation the accuracy of the diagnosis regarding FM by either the referring physician or by the rheumatologist at the time of the initial visit was correct in 34% of patients.”

The issue relates to the quote above initial visit – i.e. first impressions. Many of the chronic pain patients I see have a complex set of problems; much can get missed until you work out a few and “unlayer things” . Then you get to see what is left. The clinical course and response to various medications gradually makes things more evident.

Another important issue is the fact that Rheumatologists are very reluctant to make early diagnosis. I think they must have been wacked over the head by their supervisors in training until they were willing to accept that this is what they must do. I have had to fill out AS criteria forms explicitly in past if there is doubt to emphasize their features.
To make things worse, there is a subgroup that will get back arthritis but no sacroiliac involvement:

MRI – There are frequent studies reporting MRI superior but I think the experience of the radiologist is going to be the prime factor. MRI cannot be ordered by GP’s in our province.

If one is a woman with persistent low/belt line and below back pain (obviously pain tends to spread so other areas will be involved & AS affects neck and rib joints as well) – I would look very closely at the morning stiffness, whether you are better with rest or activity, and whether arthitis pills give you substantial help. It appears you should not trust your doctor’s initial opinions too much and maybe not even the Rheumatologist if s/he only sees you once and renders an opinion.
I find I can not give this topic justice but there are Ankylosing Spondylitis organization sites.

Women are less likely to show HLA-B27 changes as well:

I would be interested in others views on the subject.

This entry was posted in arthritis. Bookmark the permalink.