Diffuse idiopathic skeletal hyperostosis (DISH) is were you get extensive ossification of ligaments and entheses(endings of tendons and ligaments). It is relatively common (10% of people over 50). If you get boney bridging of vertebrae you can get a very stiff spine.Treatment options are limited. 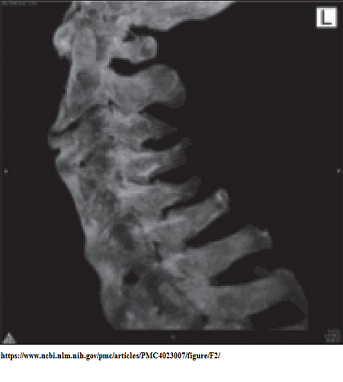 Though some are painless, some are painful.
– boney outgrowths in the neck can affect swallowing
– boney growth in thoracic rib cage can affect breathing
– boney outgrowth in spinal structures can impact nerves and cause pain
– There is increased highly tender trigger points leading to a Fibromyaglia like illness. Subgroup with metabolic syndrome most likely affected 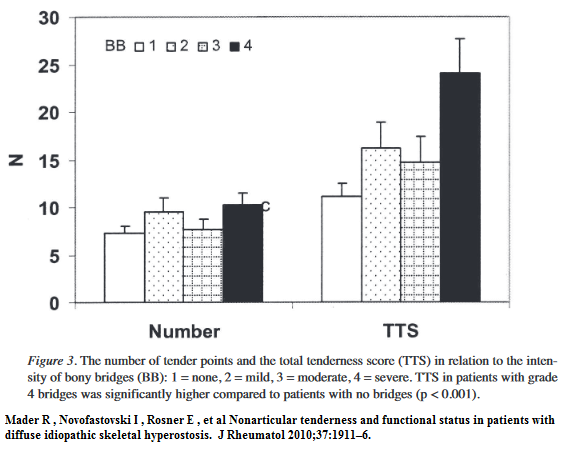 Very recently, genetic markers were identified in a Chinese study:

Treatment – there is so little out there –

Neck injuries instead of hurting the neck, can snap a boney-bridged level and damage spinal cord leading to quadriplegia. I had an elderly gent with DISH like disease that in his retirement shuttled people from a car repair place to work. Once I showed him above article he gave that up. Another gent with this issue will only drive an SUV like vehicle because he feels he will be at least some protected.

If this posterior longitudinal ligament becomes ossified enough, it can cause myelopathy (spinal damage) requiring surgery.

There is a scale to determine severity of symptoms:

Above article treatment for “mild” myelopathy was surgery

It has been suggested that even milder forms of myelopathy can present with a Fibromyalgic like illness:

They give symtoms of cervical spinal stenosis as:

“Neck extension and neck flexion resulted in immediate accentuation of abnormal pyramidal track findings in 88% and 73% of patients, respectively, suggesting a mechanical etiology for the abnormal neurological findings.” – hence “The patients were examined first with the neck in the neutral and subsequently in the flexed and then in the extended positions. ”

It has even gone so far is that Fibromyalgia patients with these findings have gone to surgery, and compared to control group of those with same symptoms, are significantly better off one year later:

These people are not candidates for manipulation. I am working on a way to numb facet joints using particulate methylene blue -maybe this could help…

This entry was posted in Back Pain. Bookmark the permalink.