Randomized trial of open release (OR) or radiofrequency microtenotomy (RFMT) for tennis elbow. Article suggests: “As a result of the extra expense of RFMT, we therefore recommend that OR is offered as the standard surgical management.” 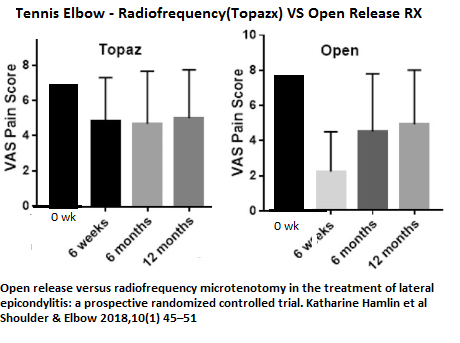 Reasons for failure to get all better? 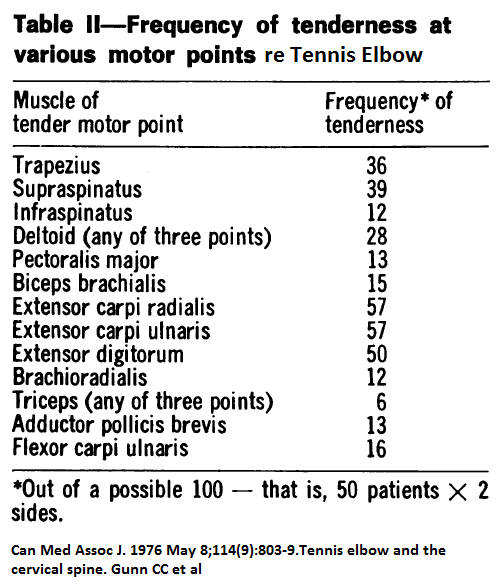 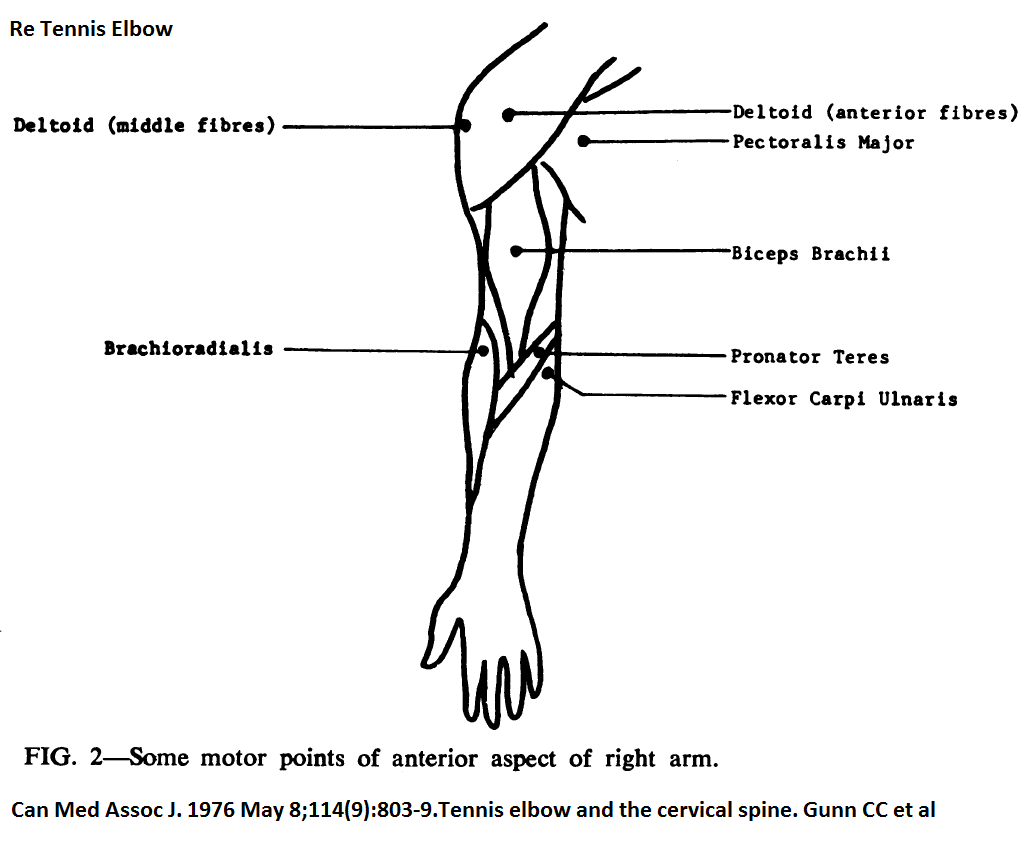 Note the date on that…To be fair, some of the tennis elbow cases were probably regional pain syndromes to start with – from then neck – both disc bulges, facets, and early radiculitis could be involved. However, I will content that some of them started with the elbow and spread out to encompass many of the tissues and the neck. Getting the pain down from 4/10 will in part involve dealing with regional triggers and the cervical spine.

It is also becoming clear that sensitized nerve in area can impact tennis elbow and denervation of  “the posterior branch or branches of the posterior cutaneous nerve of the forearm” can relieve 80% of those relieved by prior block. You feel it just down from where you palpate the radial head anteriorly. Injecting the tenderest point can give some relief and pain is reduced from 6.7 to 3.7 one year later with the worst offenders having decompression surgery
Marchese, Joseph, et al.
Prospective Evaluation of Single Corticosteroid Injection in Radial Tunnel Syndrome: Level 4 Evidence.
Journal of Hand Surgery 42.9 (2017): S51.
http://www.jhandsurg.org/article/S0363-5023(17)31095-X/pdf

I will inject it at same time as tennis elbow if tender using only 20 mg kenalog if using 40 mg on lateral epicondyle.

It has to be mentioned that some cases the radio-humeral joint is tender and injected as well with 10-20 mg steroid. This tenderness could represent instability which triggers the tennis elbow and is better dealt with with with prolotheapy:
Chronic Tennis Elbow Might Be an Instability Issue
http://painmuse.org/?p=5432

Comment – I inject the lateral epicondyle with 40 mg triamciolone in 5-10% lidocaine with particulate methylene blue – that has neurolytic properties and I have rarely seen recurrence though I have not enough for a study. I suspect this nerve could be felt and semi-neurolytic injection without steroid could be used. This is similar to what I am finding with trochanteric bursitis – some of the cluneal nerve course across the area and any buristis flares them up. I deal with them after steroid relief of inflammation by injecting perinerally, D5W along skin tracts – repeatedly. I wonder if D5W repeated injections could be of any use for tennis elbow as they were found useful in achilles tendonitis though took some time. (called it prolotherapy in skin at time but later realized  5% dexrose worked as well)

“A doctor injected tender points in the subcutaneous tissues adjacent to the affected tendon with a solution consisting of 20% glucose/0.1% lignocaine/0.1% ropivacaine weekly for four to 12 treatments, using the technique described by Lyftogt.18 The tender points were most commonly the anterolateral and anteromedial margins of the tendon and on the most posterior aspect of the tendon 2–7 cm from the calcaneus
attachment. At each point, 0.5–1 ml of solution was used to a maximum total of 5 ml.”

On average took near 10 treatments. 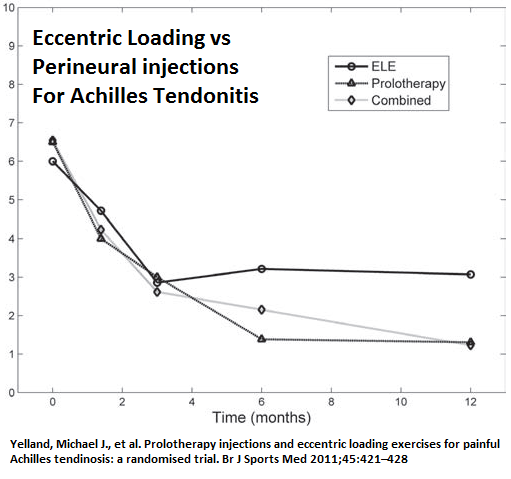 This entry was posted in Tennis elbow. Bookmark the permalink.