Several case studies have shown that transforaminal steroids could relieve Post Herpetic neuralgia (PHN) but that procedure is under heavy scrutiny because of rare strokes, paralysis and death so use of soluble dexamethasone has been edicted. 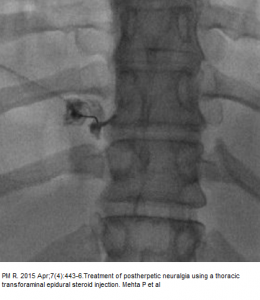 Comment – sounds like local and large doses of soluble dexamethasome are going to be commonplace. The results are life-changing and need to be applauded though they all used imaging.

This entry was posted in Injection, post herpetic neuralgia. Bookmark the permalink.