Recent findings that mast cells may trigger migraines has significant implications on cause and treatment. Mast cells play a key role in Peripheral Sensitization – Neurogenic Inflammation where tissues become overly tender and swollen. They are, however, a cornerstone of allergies as well; which complicates their role and complicates therapy.

Migraine is a chronic disease with episodic attacks, which, when frequent or severe, can be associated with poor quality of life, increased health resource utilization, lost productivity, and significant disability. Preventive therapy can therefore have a significant beneficial clinical and economic impact. However, many migraineurs are treated suboptimally. There is increasing evidence that activation and degranulation of meningeal mast cells result in meningeal irritation, vascular dilation, and stimulation of nearby nociceptive nerve endings of the trigeminal nerve, thus potentially contributing to the pathogenesis of migraine headache. The renin angiotensin system and its peptides are well represented in the mammalian central nervous system and can also promote neurogenic inflammation. Interestingly, mast cells are capable of releasing renin and increasing local production of Angiotensin II. We therefore hypothesize that mast cells contribute to migraine headache through activation of the renin angiotensin system. This hypothesis may help explain the association between migraine and cardiovascular disease as well as observations that medications that modulate the renin angiotensin system can reduce migraine-related morbidity in patients with frequently recurring migraine attacks.

A review of its association here:
J Hypertens Suppl. 2006 Mar;24(1):S139-43. Involvement of the renin-angiotensin system in migraine. Tronvik E, Stovner LJ, Schrader H, Bovim G. abstract here
A “competitor” activator – Calcitonin gene-related peptide (CGRP) has not been shown to do that.
Ann Neurol. 2005 Nov;58(5):698-705. Calcitonin gene-related peptide does not excite or sensitize meningeal nociceptors: implications for the pathophysiology of migraine. Levy D, Burstein

Do you experience pain or unpleasant sensation on your skin during a migraine attack when you engage in any of the following activities:

If two or more symptoms, 97% in the allodynic catagory.

If allodynic, then Tryptan use must be early in an attack, and use of an NSAID during an attack(if tolerated) would be useful. I would say, deactivating muscle triggers would be important as well; there is a recent study showing significant benefits there. 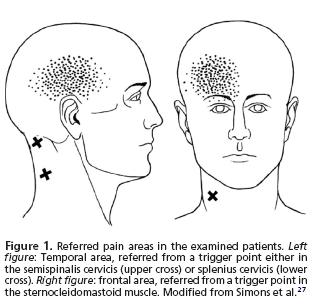 “TrP infiltration with local anaesthetic [0.5 mL of bupivacaine (5 mg/mL)]. The infiltration was repeated on the 3rd, 10th, 30th, and 60th day after the initial evaluation.” Our College frowns on use of local in the neck; saline may be equally effective. Compared to a sham injection group (needle inserted and removed) there was about 50% reduction in migraine headaches by day 60.

2) Blocking the renin-angiotensin system is helpful in migraines.

I have used lisinopril mostly in hypertensives with migraines and found it very effective (1/2 by reducing BP and 1/2 by R-A inhibition I think).

3) Deal with the mast cells with drugs. Unfortunately, leukotreine inhibitors(Singulair) by themselves don’t do well.

The association on migraines to histamine, however, was noted years ago and a patent even filed. He used Hydroxyzine 50 mg. in a few cases of patients with prolonged aura and demonstrated its ability to block subsequent migraine. The problem here is that hydroxyzine has tranquilizer properties which in themselves might have reduced stress, a factor in migraine – so is its effect really mast cell related? patent here article here

4) Deal with mast cells re allergies. What may be forgotten is that the mast cell is the allergy cell as well as orchestrating peripheral neurogenic inflammation.

Several good studies were done near the early 1980’s in Lancet:

60 migraine patients completed elimination diets after a 5-day period of withdrawal from their normal diet. 52 (87%) of these patients had been using oral contraceptive steroids, tobacco, and/or ergotamine for an average of 3 years, 22 years, and 7.4 years respectively. The commonest foods causing reactions were wheat (78%), orange (65%), eggs (45%), tea and coffee (40% each), chocolate and milk (37%) each), beef (35%), and corn, cane sugar, and yeast (33% each). When an average of ten common foods were avoided there was a dramatic fall in the number of headaches per month, 85% of patients becoming headache-free. The 25% of patients with hypertension became normotensive. Chemicals in the home environment can make this testing difficult for outpatients. Both immunological and non-immunological mechanisms may play a part in the pathogenesis of migraine caused by food intolerance.

What is not mentioned in the abstract, but discussed in the article was that just avoiding these foods without elimination diet testing was limited in value. It was likely to result in over-exposure to some lesser-involved food – for instance rice had a 15% reaction rate. It was also found that those who were currently abusing painkillers or ergot, or still on OCP’s composed the 15% who did not respond. Subsequent articles were often based on

Well, so where are you going to get easy access to foods as causes of migraines? – well, look at kids:

93% of 88 children with severe frequent migraine recovered on oligoantigenic diets; the causative foods were identified by sequential reintroduction, and the role of the foods provoking migraine was established by a double-blind controlled trial in 40 of the children. Most patients responded to several foods. Many foods were involved, suggesting an allergic rather than an idiosyncratic (metabolic) pathogenesis. Associated symptoms which improved in addition to headache included abdominal pain, behaviour disorder, fits, asthma, and eczema. In most of the patients in whom migraine was provoked by non-specific factors, such as blows to the head, exercise, and flashing lights, this provocation no longer occurred while they were on the diet.

This was an excellent study – I cannot believe the skill they had in putting these kids on a restricted diet and double blind testing their reaction with powders in soup – repeatedly comfirmed reactions. Their findings suggest nearly ALL children have food as the primary concern.

“In one large-scale double-blind trial of an elimination diet involving 88 patients treated with an oligoantigenic diet, a diet that eliminates all but a few sensitizing food antigens, 93% with severe frequent migraine responded and were free of headaches [24,25]. The diet consisted of lamb or chicken, rice or potato, banana or apple, Brassica, water, and vitamin supplements.
Of the 82 patients who improved on the diet, all but eight patients relapsed on the reintroduction of one or
more foods. A remarkable fondness for migraine-provoking foods was a common finding, some patients craving them and eating them in large amounts. Cow’s milk and cheese caused headaches in most of the patients in the study, but none of the patients complained of headaches after substituting goat’s milk cheese.
Notwithstanding the impressive response demonstrated in this double-blind investigation, in practice the relationship between food allergy or intolerance and migraine is difficult to prove, because the elimination diet is too demanding and skin tests and antibody titers demonstrate inconsistent results. The concept remains controversial, and many neurologists and allergists are skeptical of the use of restrictive diets in treatment.”

My Interpreation – These Doctors are too lazy to look for food triggers in children and so pretend they don’t exist. I once heard a pediatric neurologist talk on childhood migraines with barely a mention of foods. There was much discussion of other potential treatments. I mentioned something to the effect that 93% of the talk should have been more food related but it was obvious the doctor was not familiar with elimination diets. A very good reference here is an old book “Tracking Down Hidden Food Allergy” by Dr. W. Crook still available at Amazon
here

Otherwise, the treatments for children have been mentioned here:

Stress has been demonstrate to induce mast cell degranulation and this is thought to be through stress activated Corticotrophin-releasing Hormone:

The most interesting offshot of this effect was mast cell degranulation can be ameliorated by relaxation training:
Headache: The Journal of Head and Face Pain Volume 39 Issue 2 Page 101-107, February 1999
Mast Cell Activation in Children With Migraine Before and After Training in Self-regulation
Karen Olness et al. abstract here

So what is available to use here:

– Biofeedback – Not really available here though cheap biofeedback GSR old radioshack monitors can be gotten off ebay
– Hypnosis – I have two psychiatrists tell me in no uncertain terms that one should never do hypnosis in children even with a parent present because it could come back to bite you. There is a Dr. Bromley in my clinic who, though semi-retired, still does hypnosis and I am grateful for his help.

– Hypnosis tapes there was a recent article on its use described here:

Deepening was through making the favorite place a multisensory experience and through progressive muscular relaxation. (tell them to relax each area in turn)

Headache counteraction was thru several rechniques:

“The average frequency of HA decreased from 4.5 per week to 1.4 per week (P < .01)." – What is left? At the Canadian Pain Society this year was mentioning of a study using yoga for adolescent Irritable bowel (another mast cell disease) with success.

This entry was posted in Headaches. Bookmark the permalink.