Weightbearing Pains with Wrist in Extension: – Self Treatment

If get pains in wrist in extension – especially with pressure – then a strap self-mobilization technique could help.

Man Ther. 2013 Dec;18(6):568-72.
Short-term effects of self-mobilization with a strap on pain and range of motion of the wrist joint in patients with dorsal wrist pain when weight bearing through
the hand: A case series.
Choung SD, Kwon OY, Park KN, Kim SH, Cynn HS.
http://www.ncbi.nlm.nih.gov/pubmed/23830868 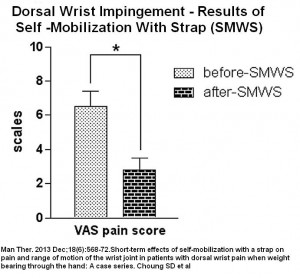 Comment – Would have been nice if they specified the impingement. Does sound like too far gone for a simple manipulation ( hold wrist and elbow with separate arms and jerk wrist into distraction).  Does not deal with instability issues that could be a factor. Nonetheless, is simple enough for patients to do at home and seems safe.

This entry was posted in wrist. Bookmark the permalink.

One Response to Weightbearing Pains with Wrist in Extension: – Self Treatment