Saw recent talk by Dr. Apkarian  where he noted overactivity of nucleus accumbens (pleasure center) in chronic pain – he called it “addicted to pain” (no relation to painkillers). Now this appears to be driven by increased white matter circuitry from medial prefrontal cortex (a thought center) with nucleus accumbens . This increased circuitry “robustly” predicts transition to chronic pain. They speculated that the “brain structural differences, most likely existing before the back pain-inciting event and independent of the back pain, [and] predispose subjects to pain chronification” 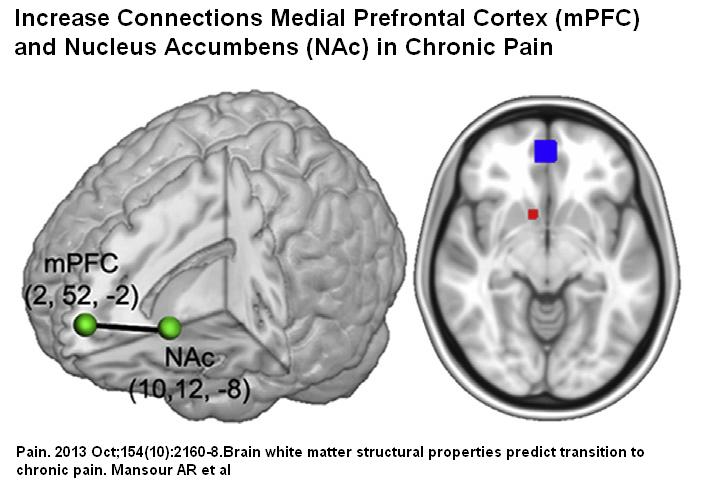 Comment –  I thought activation of NA was a vain attempt by brain to block the pain by making it “pleasurable” but it looks like the tracts are laid out enhanced even before chronic pain started. Could be an objective finding in chronic pain but most likely perverted by those who want to prove a subject is not in pain – (ie a malingering test). None-the-less it objectifies that people really are in pain. nike air max soldes pas cher nike air max soldes pas cher

This entry was posted in Insurer issues, pain mechanisms, Pathophysiology. Bookmark the permalink.