Chronic Neck and Back Pain Might Be a Treatable Infection

Since 2001, there have been case studies showing you can grow low grade anaerobes out of damaged discs; these ignored as contamination or incidental because some studies did not find any infection. Now it appears that those with positive cultures are 5.6 times more likely to subsequently develop “Modic” end plate changes.  A separate article also in press found following 100 days of antibiotics, chronic Back pain cases, with modic degenerative changes in the backbone improve. They have  1/2 the pain level, a year later, versus no change in control group. They toted this as substantially better than any established conservative treatment.This represents a huge shift in thinking about discogenic neck and back pain.

Several case studies grew low grade anareobic bacteria out of discs in 1/3 to 1/2 of cases ( like helicobacter pylori was before taken seriously). The initial study was published in Lancet in 2001. Lancet  Jun 23, 2001; 357, 9273; 2024 – 2025;
Stirling A, Worthington T, Rafiq M et al
Association between sciatica and Propionebacterium acnes.  no abstract.

They found 53% infected.  They suggested the need to incubate these organism for 7 days might be the reason they were not previously recognized.  They could  however, see them even in sections of disc tissue (see below). In many cases they found two organisms – Propionebacterium acnes and Corynebacterium and occasionally Staphlococcus. There was no association of positive cultures and previous epidural injections. 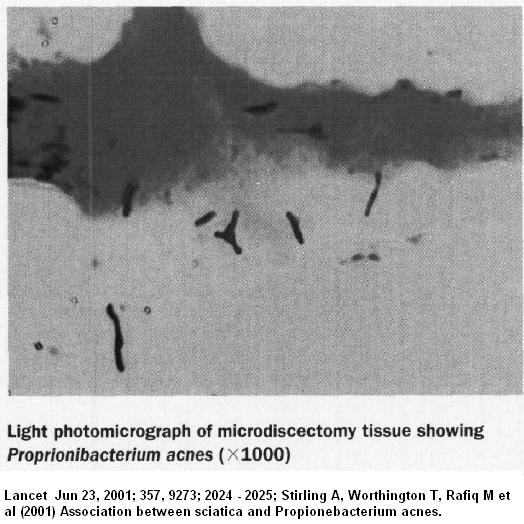 He found 43% infected – again,  P. acne being the most prominant organism. To corroborate his findings, he looked for elevations of Anti Lipid S antibody levels. They were elevated in 1/3 of the infection group but in only one of the “control” group.

Hanne (ref below  and here) discussed another Stirling study
“Stirling et al. conducted another study with 207 patients with lumbar disc herniation and 27 patients with other spinal disorders such as scoliosis, fracture and tumors, all patients had nucleus material removed. In 37 % of the patients with lumbar disc herniation bacteria were indentified, mainly P. acnes. Conversely,no (0 %) bacteria were found in the extracted nuclear material in the group with other spinal disorders.”

These results were not taken seriously because they were thought to be skin contamination or incidental as some studies grew no such organisms. However, the fact that Striling above could not grow germs out of disc samples during surgery for spinal tumors, vertebral fractures and scoliosis surgery made contamination less likely.

These infections are thought associated with sclerotic changes to vertebral end plates and associated bone edema seen on MRIs as Modic changes. It is felt the anaerobic organisms thrive in the lower oxygen environment in these sclerotic areas.

Modic changes occur in 46% of non-specific low back pains versus 6% of the general population. as per review:

An article in press found  if organisms are grown,  Modic changes are likely to develop later in 80% of cases (5.6 times as likely as those without organisms) leading authors to speculate infection fostered the modic changes/bone marrow edema. They found a 45% infection rate – mostly p.acne. To confirm their findings they did PCR amplification for bacterial RNA in disc tissue – they found it positive in all cases of culture positive but negative in all cases of culture negative.

Taking it even further, is an article showing that 100 days of Clavulin 500 TID for 100 days can drop pain back pain scores from 6.7 to 5 in 100 days and to 3.7 in one year (versus 6.3 – 6.3 – 6.3 in the double blind control group): There were 90 in treatment and 72 in placebo. Clavulin was picked because of its lack of anti-inflammatory effects which could confuse the issue. Statistically, p= 0.0001. Leg pains did even better dropping from 5.3 to 1.4/10 while control group actually went up from 4 to 4.3/10.(p=0.0001). Clavulin was apparently used in order to avoid confusion over anti-inflammatory effects of certain antibiotics.

They felt their results with known resistant cases “has been substantially greater than those described with all other established conservative treatments”.  Results do speak for themselves… 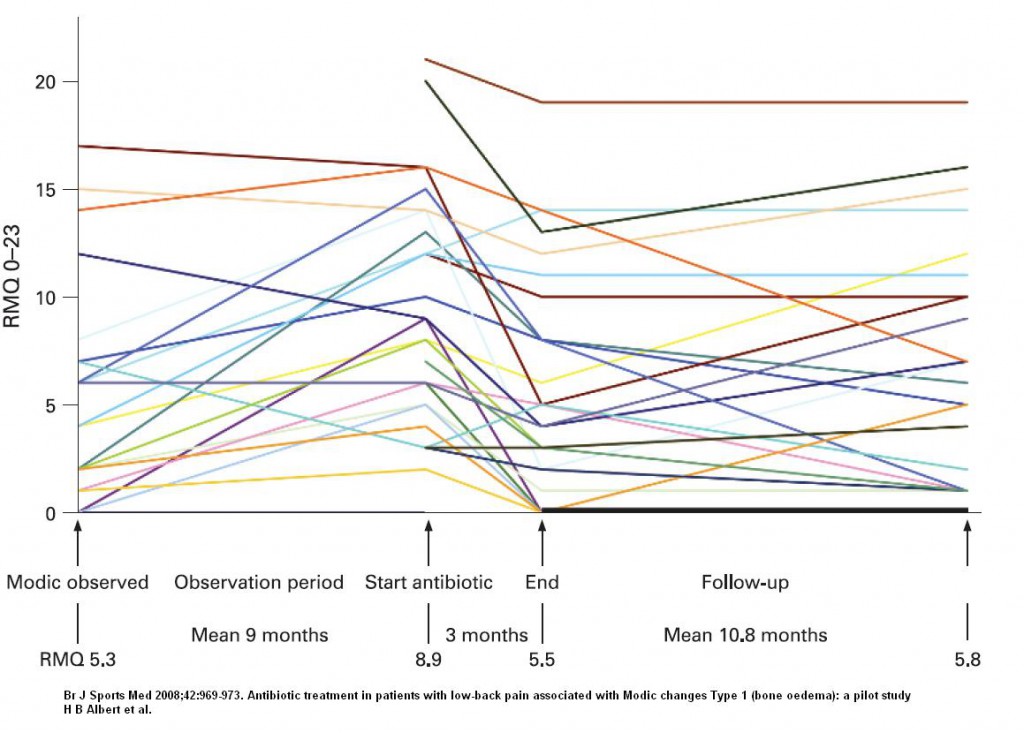 | worsening after finishing in some  —–>

They could have helped clear up the issue but did not have the courage of their convictions and put their subjects on preoperative antibiotics. The did not grow anything, but is well known you can’t grow bugs out of urine in bladder infections if on antibiotics so why should it be any different here? Cannot understand why they didn’t give intraoperative antibiotics after they got samples…

They actually found 2/24 cases grew staph but they dismissed them as contamination despite “strict asepsis” used in collection.  I do not have information on whether they used preop antibiotics as journal is not received by our university. There results, however, make the situation very confusing.

Another study grew p.acne in 3.7% of disc cases but were able to grow the organism from a variety of  surfaces (including muscle) and concluded contamination was more likely:

It has been known that pamidronate can benefit chronic back pain and maybe it works on this Modic change bone marrow edema:

A study on exercise therapy for patients with modic changes found no benefits; maybe infection explains why.

This paradigm would explain why injection of ozone into discs has been found to be some effective in chronic discogenic back pain:

also:
“Zambello et al (15) randomized 351 patients with low back pain for treatment with either ozone or steroid (epidural) and planned a crossover during the followup to the other group in case of failure to respond to treatment after 4 weeks of therapy. The long-term outcome remained excellent or good in 47.3% of 171 patients treated by epidural steroid injections and in 77.1% of 180 patients treated with O2-O3.”

Results: Eight observational studies were included in the systematic review and 4 randomized trials in the meta-analysis. The indicated level of evidence for long-term pain relief was II-3 for ozone therapy applied intradiscally and II-1 for ozone therapy applied paravertebrally. The grading of recommendation was 1C for intradiscal ozone therapy and 1B for paravertebral ozone therapy.Limitations: The main limitations of this review are the lack of precise diagnosis and the frequent use of mixed therapeutic agents. The meta-analysis included mainly active-control trials. No placebo-controlled trial was found.

Conclusions: Ozone therapy appears to yield positive results and low morbidity rates when applied percutaneously for the treatment of chronic low back pain.

Comments – must admit after the XMRV – Fibromyalgia fiasco I am reluctant to believe in infections. However, I have two cases so far, that have more pain than they would think they should have, and want to try the antibiotics. Presence of irritable bowel/diarrhea issues limits selection using clavulin but looks like flouroquinolones could be used… I’ll let you know in 3-12 months… A annoying thought is whether the infection comes back after stopping antibiotics and this is why there is relapse of some after the 90 days of antibiotics – are we really going to need to keep some of these cases on antibiotics like acne cases? I’ve had trouble getting people to tolerate the 500 mg clavulin and suggest probiotics. – maybe consider using 250 mg after first week?

addendum – Warning has been sent out to avoid missing blatant disciitis/osteomyelitis in IV drug users: – case presented of patient with multiple emerg visits for back pain finally found to have disc infection:

“We present a case of a 50-year-old male with a past medical history of chronic back pain and IV drug abuse who presented with acute back pain and in whom a diagnosis of vertebral osteomyelitis was missed during multiple visits to the emergency room.”

“From the limited evidence available, the possibility that disc infection may be linked with disc degeneration should not be ruled out. There is a need to investigate this further through larger, adequately powered multi-institutional studies with contaminant arm to control for specimen contamination.”

“Chronic dosing of clavulanic acid alleviates neuropathic pain in rats and up-regulates glutamate transporters both in vitro and in vivo. Crucially, a similar up-regulation of glutamate transporters in human spinal astrocytes by clavulanic acid supports the development of novel b-lactam-based analgesics, devoid of antibacterial activity, for the
clinical treatment of chronic pain.”

This entry was posted in Back Pain, Neck. Bookmark the permalink.