Studies on Achilles, Patellar and Lateral epicondylar (tennis elbow)tendonitis have demonstrated the ultrasound demonstrable appearance of a “vasculo-neural growth” that corresponds to the site of pain. In long-term resistant cases, treating these lesions with sclerosing agent, polidocanol, under ultrasound guidance; led to “clinically good results” in most cases. Disappearance of the “vasculo-neural growth” corresponded to the improvement.

Mean pain duration was 23 months; US showed “showed structural tendon changes with hypo-echoic areas, and a vascularity, corresponding to the painful area”. It was in the extensor carpi radialis brevis origin.
Technique:
Polidocanol 10 mg/ml (Aethoxyskerol 1%)– a cursory look on the net found a Canadian supplier at:
http://www.omegalaboratory.com/eng/order_form.asp

0.7 X50 mm2 needle – well, 20 gauge has an inner diameter of 0.64mm so the stuff must be pretty thick..
2 cc syringe – I might have to settle for a 3cc – do not try this without a leur lock or you may be more than just red faced…
sitting with arm resting at shoulder height on a table
elbow 70-80 degrees flexed resting pronated
Site US from top to find hypervascularity; needle by necessity entering from side parallel to surface of bone.
Injections in increments until all blood vessels were closed – took between 0.4-1 ml total.

This is my pathetic drawing of their US color view of the “vasculo-neural growth”. The view is the lateral epicondyle – where does one inject? Could be all over it – but remember the affected areas are tender so if you have dilute local in, you might be able to tell if you got it all if it goes numb (would be interested in what the authors think)
At 8 months, Visual Analog Pain scale went from 75 to 34/100, grip improved and patient satisfaction was 83%.

In a study, you cannot contaminate it by doing other measures, but I suspect more improvement could have been realized by treating other issues:
1) Supinator “radial tunnel” syndrome – extension of middle finger and resisted supination might be painful. Unlike what people are taught, the most susceptible radial nerve bifurcation can occur lower than the 1.3 cm below anterior radial head and could be up to 3 cm below the radial head.
YC Loh, Journal of Orthopaedic Surgery 2004;12(1):83–86 A new clinical test for radial tunnel syndrome—the Rule-of-Nine test: A cadaveric study

I have not always found that, but the supinator does become spastic/trigger activated in some cases and if left untreated will develop a life of its own with superficial radial nerve irritation.

2) Spinal level problem – doesn’t take much to find they are tender over the lower neck on the effected side and in other triggers on the way up corresponding to a particular nerve root. Dr. C. Gunn originally called this “Pre -Spondylosis” but with the severity of pain, distribution of triggers and in some cases edema and tropic changes ( and now the vasculo-neural changes), it is also likely a form of Neurogenic Inflammation. In neurogenic inflammation, nerve damage cause the usually inputting sensory nerves to upchuck irritating compounds backwards into the damaged tissues – glutamate, Substance P, and calcitonin gene-related peptide particularly with tennis elbow.

Dr. Gunn found the paraspinous dorsal rami fed muscles become spastic and need treatment in addition to the triggers that the neurogenic inflammation creates down the arm. He did the impossible – he took WCB patients with tennis elbow and with work to paraspinous and distal trigger areas was able to obtain improvement:Can Med Assoc J. 1976 May 8;114(9):803-9.
Tennis elbow and the cervical spine.
Gunn CC, Milbrandt WE.
The exact cause of tennis elbow, a common condition, is still obscure. While the condition may well be entirely due to a local disorder at the elbow, the results of a study of 50 patients whose condition was resistant to 4 weeks of treatment directed to the elbow suggest that the underlying condition may have been (at least in these patients) a reflex localization of pain from radiculopathy at the cervical spine. Clinical, radiologic and electromyographic findings supported this suggestion. The pain was demonstrated to be muscular tenderness, which was maximal and specific at motor points. Treatment directed to the cervical spine appeared to give relief in the majority of patients. The more resistant the condition, the more severe were the radiologic and electromyographic findings in the cervical spine.
I consider him a father of neurogenic inflammation. He understood that segmental trophic changes, edema (he uses a match to make impressions) and specific nerve distributed triggers were a subtle form of nerve damage and was not afraid to call it neuropathy in the face of much scorn at the time. He has received the Order of Canada for his work. I have had the privilege of training with him and find it is very much like watching Sherlock Holmes at work. Keen observation and knowing palpation can delineate a problem specifically and quickly and it is “awesome” to watch.
His research can be accessed at:

Re neck – One can at least use cervical traction, ultrasound to facets and massage to the triggers if nothing else is available.

In this case, the Polidocanol was diluted to 5 mg/ml and 2-4 mls were injected so you will need a 5 ml syringe.
They mention the patients were pain free from the anesthesia so they must have mixed 1% 1:1 with local. They were allowed to go back to vigourous training 1 week after.
The blood vessels entered the achilles tendon anteriorly from a fat pad area. While monitoring form back, the needle is inserted medially ventrally to achilles where the retrocalcaneal buras adheres (side facing bones). They have had some mid-tendon abnormalities on the dorsal side (facing skin) that was painful and also injected. This would fit with Dr. Cyriax finding that the inflammation was mostly under the achilles tendon where it is hard to reach and deep friction.

In regards to patellar:

Polidocanol diluted to 5 mg/ml. 1-2 mls injected.
Injected on dorsal side (underneath side) while on ultrasound control
back to full workout after 2 weeks

Comment – now it becomes clear why Botox by itself cannot rid the problem:

Botulinum Toxin Injection in the Treatment of Tennis Elbow A Double-Blind, Randomized, Controlled, Pilot Study
M.J. Hayton
The Journal of Bone and Joint Surgery (American). 2005;87:503-507
found no effect but injected it 5 cm from the lateral epicondyle – too far for it to stop the neurogenic inflammation /neurovascularization locally. And maybe not the best drug for neurogenic inflammation anyway.

Early on, I feel that corticosteroid injection is key to success but will take out any supinator problems before dealing with lateral epicondyle. Another issue deals with whether there is any residual pains after a week – it is easy to miss a little spot of problem near the “rim” of the area – as seen from the drawing, it goes all over the lateral epicondyle – if not taken completely out then I presume the budding “vasculo-neural growths” grow back into the whole epicondyle. It has been Cyriax’s contention that if any residual is not re-injected that it has been a waste of time – and now that makes sense. Obviously, one has to look for related muscle triggers and neck problems to.

Another interesting finding is the reduction of pain with certain mobilizations: 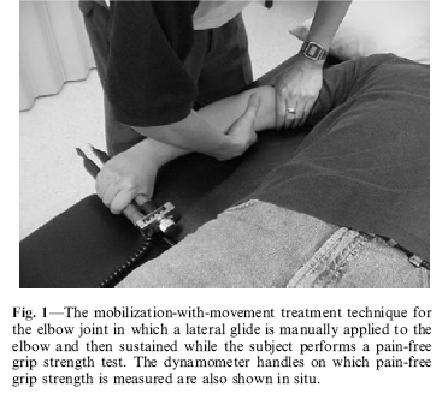 Man Ther. 2001 Nov;6(4):205-12.
Specific manipulative therapy treatment for chronic lateral epicondylalgia produces uniquely characteristic hypoalgesia. Vicenzino B, Paungmali A, Buratowski S, Wright A.
“using one hand to glide the proximal forearm laterally while the other hand fixed the distal end of the humerus (Fig. 1). The glide was applied and sustained while the subject performed the pain-free gripping action. The lateral glide was released after the subject had completed the pain- free grip exercise. Six repetitions were performed with a 15 second rest interval between repetitions”
It is facilitated by patient tightly gripping something in hand at time.
This resulted in rapid pain relief and increased grip strength. Done wrong, however, the maneuver can make things worse.

1) Sclerosant not superior to Lidocaine with epineprine if either injected in the tennis elbow vein plexus under ultrasound control: 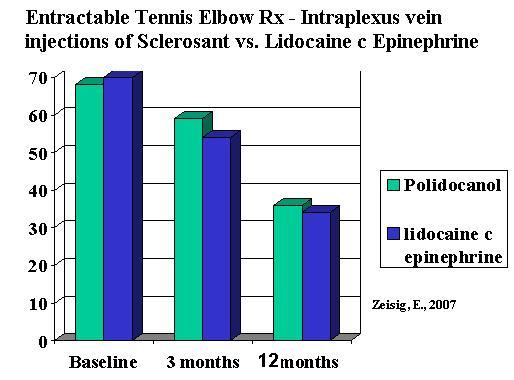 50 – 62% satisfied after 3 months. Those in the lidocaine with epinephrine group that were not satisfied, received sclerosant with benefit with 80% satisfaction.

Comment – another one shot wonder!! If additional injection helped failures why not give additional injections well before 3 months? If all you are targeting is the venous plexus, then maybe consider using small needles like those used in varicose veins cosmetic work. The lidocaine with epinephrine could go through a 32 gauge needle and hurt much less. I injected a case under Ultrasound ‘control” and found the veins automatically cleared; I am not convinced Ultrasound is needed.

2) Blood injection. This one was done for refractory (12 months) MEDIAL epicondylitis (golfer’s elbow). I find these difficult to treat and more likely to have been referred from neck (lower triceps will also be very sore).

[BTW re medial eipcondylitis, steroid injection works for 3 weeks only in one study using 40 mg methylprednisone (They do not mention ANYWHERE if this was Depo-medrol or not but I’m assuming it is.The Journal of Bone and Joint Surgery 79:1648-52 (1997)The Efficacy of an Injection of Steroids for Medial Epicondylitis. A Prospective Study of Sixty Elbows*SHALOM STAHL, M.D. and TEDDY KAUFMAN, M.D., HAIFA, ISRAEL. Dr. Cyriax, one of the fathers of orthopaedic medicine, made it clear that in tennis elbow, if the pain was not all better in a week, it needed repetition. ANOTHER ONE SHOT WONDER!!!] 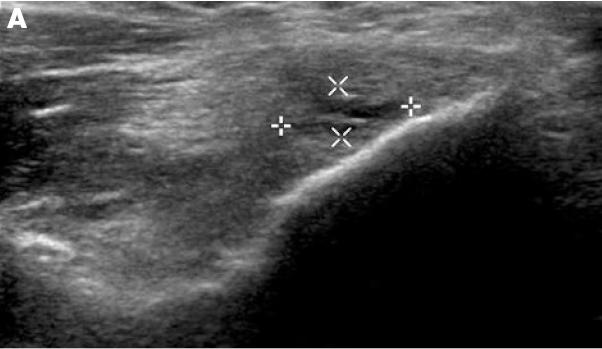 Interestingly, the neovascularization was there too: 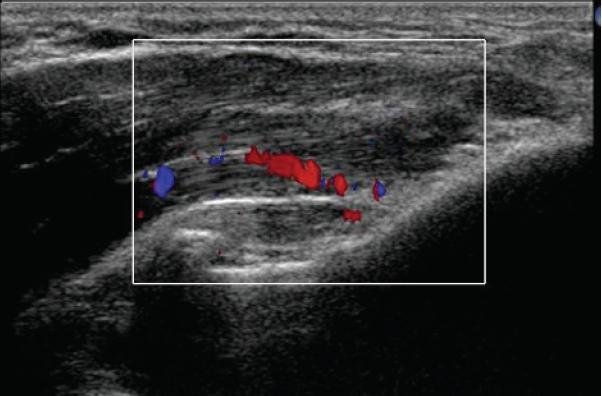 Technique: “2 ml of autologous blood was withdrawn from the contralateral antecubital fossa of the patient and 2 ml of bupivacaine was infiltrated along the surface of the tendon using a 23G needle. After a
few minutes to allow the anaesthetic to work, the needle tip was then positioned into the site of the maximum tendon injury and the tendon was dry needled to create fenestrations and so cause fibril disruption and internal bleeding. The autologous blood was then slowly injected into the site of tendinosis and fibril discontinuity.”
Results: 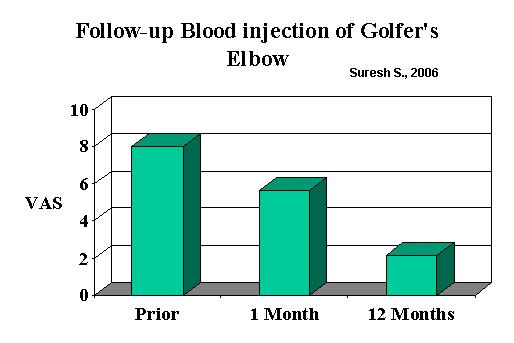 They felt it was the combination of the dry needling and blood injection that helped.
3) Injection of Platelet rich plasma: 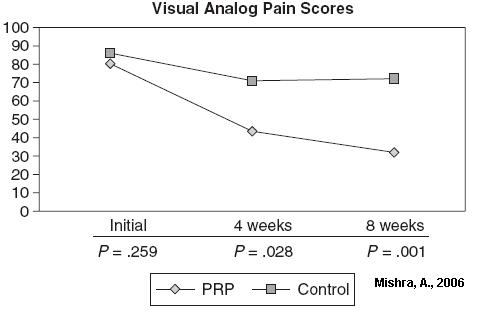 Comment – this is more like it – 50% relief in a month. Just how would one do this? The machine they used was not commercially available.

This entry was posted in Pathophysiology, tendonitis. Bookmark the permalink.

12 Responses to Does Pain “Grow” at Tendon injury sites? -and Treatment tennis elbow