Will MRI Localize the Site of Back Pain? – Epiduroscopic Study Suggests No – What this means for Insurers

Cases of chronic back pain with or without non-radicular leg referrals (in leg but not classic sciatica) were examine clinically, with MRI and by using a “keyhole” scope instrument in the spine called an Epiduroscope.  Scoping and probing area during scoping could reproduce spine and leg pains in 87% of cases. MRI concordance was only 3.5% (flip your coin – you’ll be more accurate).

In the previous century it was said that 85% of back pain is not diagnosable. Now that is changing. Scopes put in the spinal canal can find areas of redness and neurovascular growth that reproduce the patient’s pain in both back and leg when probed. Clinical exam and MRI just don’t do well in comparison.

Clinical exam and MRI were not at all helpful in delineating the problem or the level the problem is at: 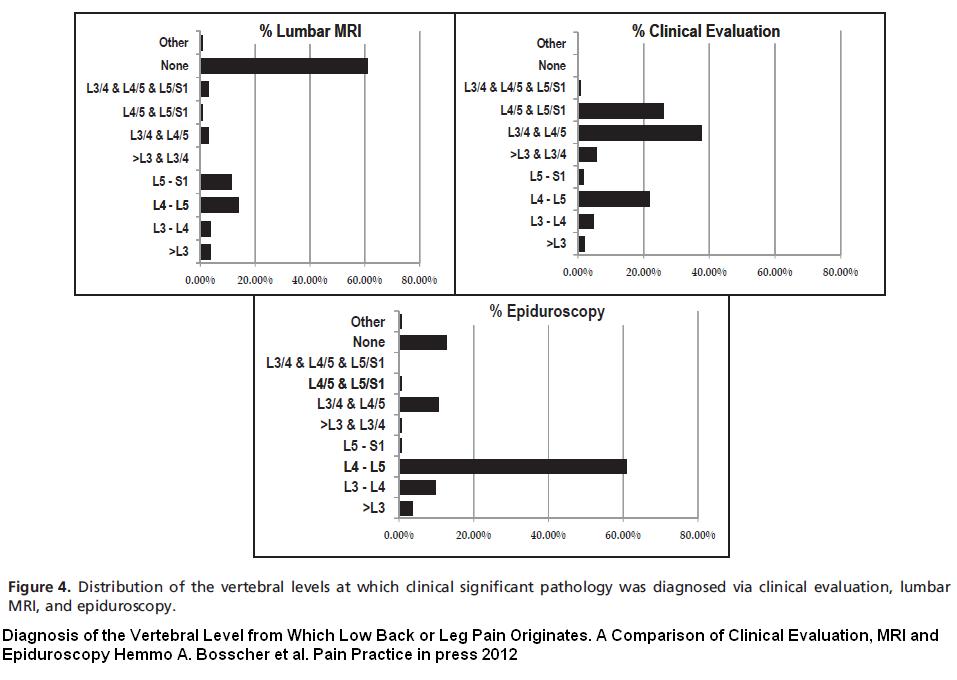 As you can see, on epiduroscopy, L4/5 was the primarly level of problem; For MRI the primary level was “None”. The concordance of MRI with epiduroscopy was 3.5%.

addendum – The dural can be a very pain sensitive structure and merely injecting fluid into the epidural space can be painful:
Buchser, E. E., & Chédel, D. (1992).
Pain Upon Injection in the Epidural Space Common and Unexplained
To the Editor. Anesthesia & Analgesia, 74(3), 475-476.
http://journals.lww.com/anesthesia-analgesia/Citation/1992/03000/Pain_Upon_Injection_in_the_Epidural_Space__Common.41.aspx

Comment – Victims who are made victims twice over by having to deal with SGI (our provincial insurer) are told that there is nothing significant the matter with them when their MRI’s are negative. I recently had a subject that had bad neck pains referring to shoulder blade (obviously facet, nonetruded disc and now epidural components) . He also had such a bad thoracic outlet syndrome  that he could not raise his arms in Roos postion more that 10 seconds without getting numbesss, he his arm was  obvious red  and the skin temperature lower. He was still told there was nothing significantly the matter with him. [oddly they did say he could apply for Canada pension].  It  is getting so  nauseating obvious that they are playing the game hear-see-say no evil that I am certainly sick. This is all done with legal protection from all damages and anonimity. How to deal with this situation is another matter… sac michael kors outlet sac michael kors outlet

This entry was posted in Back Pain, Insurer issues, Neck. Bookmark the permalink.

2 Responses to Will MRI Localize the Site of Back Pain? – Epiduroscopic Study Suggests No – What this means for Insurers