Much of the work I do is treating the “peripheral sensitization” – the tissues that become locally sensitive and knotted. Working these areas allows me to get a feel for how much is coming from the spine or other sources, and how much is being generated locally. On average, about 50% is local and 50% is “referred” – plus or minus some. Following is a tragic case of hip pain treated vigorously without looking for local causes.

1. Hot issue concerns – have one gentleman with early lung cancer treatment that had two bone scans (before + 6 months post surgery) before I was convinced there was not cancer involved.

– have one gentleman with prior steroid injections (nothing oral) and a hip injury. Pain was progressive and osteonecrosis (spontaneous hip bone collapse) of both hips was found. He was not a drinker but was found to have a mild blood clotting disorder. He had bilateral hip replacements. In Regina, this took over two years to accomplish which meant he had to “walk around” on broken legs for 2+ years – It was sickening.

2. Hip Osteoarthritis – muscles involved – One would think this is straightforward – as there is good correlation between moderate- severe OA hip on Xray and hip pain. Yet it is not that simple. I have one former police officer come in with severe hip pain. He had some flexion contracture of his other knee and so hiked up his hip to swing his leg. When I locally worked on this gentleman, I found his severe pain was coming from his quadratus lumborum. a back muscle used to hike the hip – it can refer to the hip: 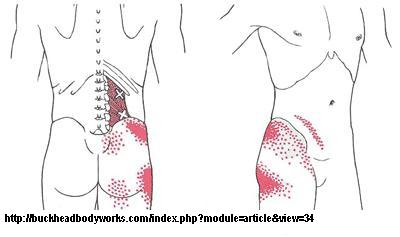 I stretch/massaged it out- a very painful process for him – yet after he felt much better. I kept this up until he could have his hip replacement and it helped control the pain (also worked on his flexion knee contracture).

In hip OA I find that there is always spams of the pectineus muscle: 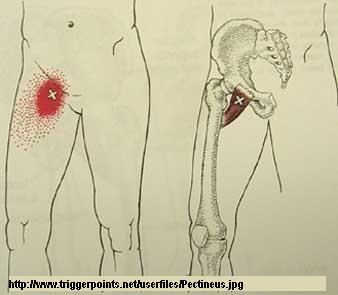 I will electrically needle and press – stretch the area. gripping it and shaking helps to get it release as well.

3. Obturator Nerve block differentiates back from hip problem:
Sometimes it is difficult to sort out how much is coming from the hip and how much coming from the back. I had a case with hip OA and some spinal stenosis; it was critical to determine the origin of the pain. She underwent a regional obturator nerve block of the hip which relieved 3/4 of the pain even on walking. She underwent a hip replacement and the residual back pain was coming in part from the quadratus lumborum which responded some to treatment.

Working the hip muscles locally would come across an obvious femoral nerve tenderness not helped by massage with tinel’s sign – and saved the above lady 10 years of grief.

4. Most regional problems will have a spinal nerve level involvement of sorts for which regional Intramuscular stimulation is of benefit.

There are other hip problems too much to included here….

This entry was posted in Hip Pains. Bookmark the permalink.