Needling the lower trapezius muscle was found beneficial in chronic neck pain. I was so taken with the approach then had to injecting lower trap(with muscle relaxed rather than stretched) that I had to include a pic of actual treatment approach. There are so few controlled studies in myofascial pain that this is exemplary. 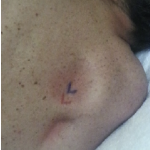 Criteria for inclusion in this study were

“the physiotherapist firmly held the lower trapezius muscle in a pincer grasp to precisely locate the trigger point for TrP-DN. Then a monofilament needle was directed upward across the muscle mass as it was held by the fingers to avoid any possibility of penetrating the lung and causing a pneumothorax.  The needle was moved up and down within the muscle, using a “fast-in and fast-out” technique. Needle insertions were repeated 8 to 10 times.” Control group had needling near trigger only.” 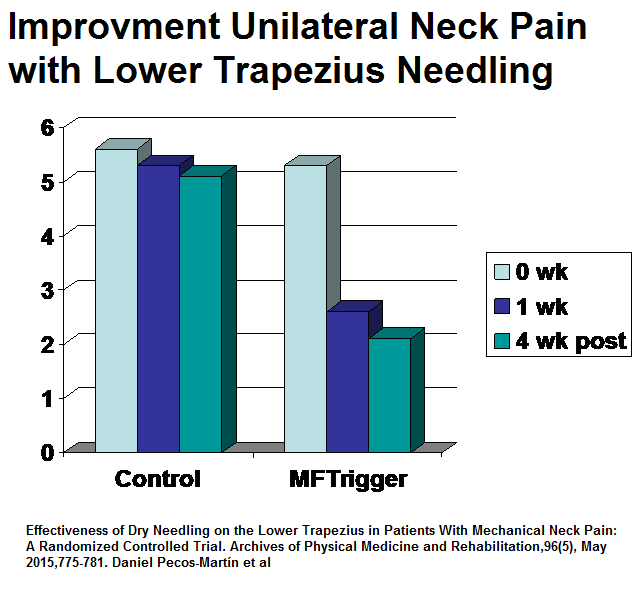 Failure of any trigger point study might be from the inclusion of subtle radiculitis cases that reactivate trigger points; this study was significantly restricted to avoid that. makes one consider the whole trapezius in unilateral neck issues. I have for years used 5% lidocaine </= 2mls into trigger because it was felt subtle microentrapment of nerves was part of the problem. I also vigorously transverse stretch the muscle sweeping across it. Now I have found I can double the release by pushing tissues transversely with index and middle fingers and thumping between with an activator 20+ times – tissues will gradually let go and you can sweep right through tissues. 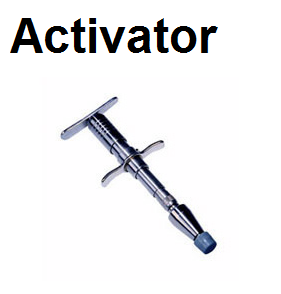 To stretch the lower trap, I have people put affected side  hand on head and pull affected elbow across chest. You can also ischemic pressure with lying on a tennis ball.