Injecting articular branches femoral nerve and obturator nerve can give some relief for up to 3 months. However, results are more likely from the steroid used.

Articular branches femoral nerve injection: “the needle was inserted from below the anterior superior iliac spine to the anterolateral aspect of the extraarticular portion of the hip joint. The needle was located below the anterior inferior iliac spine near the anterolateral margin of the hip joint (Fig. 1). Sensory nerve stimulation testing was performed at 50 Hz and the needle was positioned  based on the patient’s identification of the point of maximal stimulation (reproduction of numbness and tingling sensation with approximately 0.5–0.7-mA of voltage amplitude).

Obturator nerve hip branches: “To block the articular inserted at the anteromedial aspect of the extra-articular portion of the hip joint. After palpating the femoral artery, the needle was inserted just medial to the femoral artery, below the level of the inguinal ligament. Under fluoroscopic guidance the needle was placed below the inferior junction of the pubis and the ischium, which appears teardrop in shape in the anteroposterior radiograph  shown in Fig. 1. 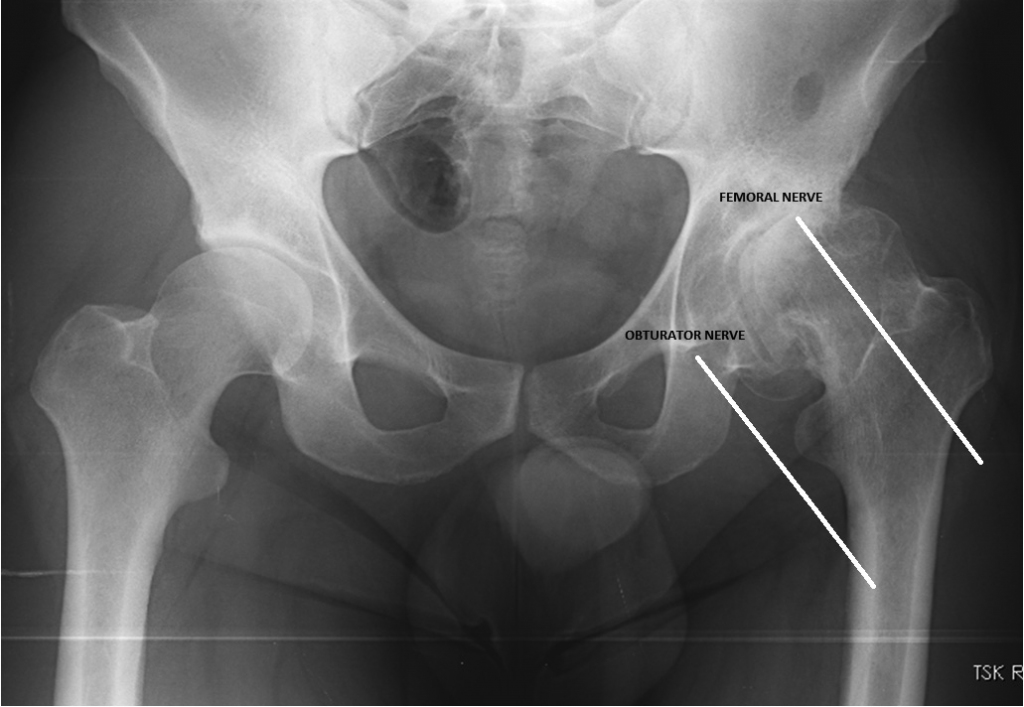 Unfortunately the now say “2 cc (mixture of 1 cc of betamethasone and 1 cc of 1% lidocaine). Each ml betamethasone was 6 mg (I presume they used celestone long acting) – the 2 mls total celestone would be 80 mg triamcinolone… 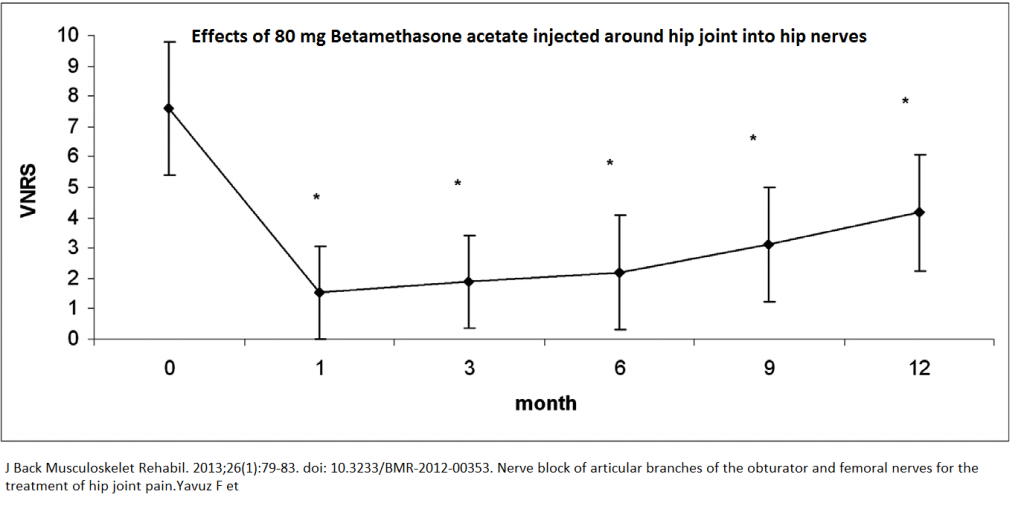 Addendum – One comment suggested a “threee in one” femoral block might do. A simple account of this block is here:
Three-in-One Femoral Nerve Block as Analgesia for Fractured Neck of Femur in the Emergency Department: A Randomized, Controlled Trial
Alan K. Fletcher, Alan S. Rigby,Francis L. P. Heyes
Ann Emerg Med. 2003;41:227-233.]
http://sphemerg.ca/files/ThreeinOneFemoralNerveBlockasAnalgesiaforFracturedNeckofFemur.pdf 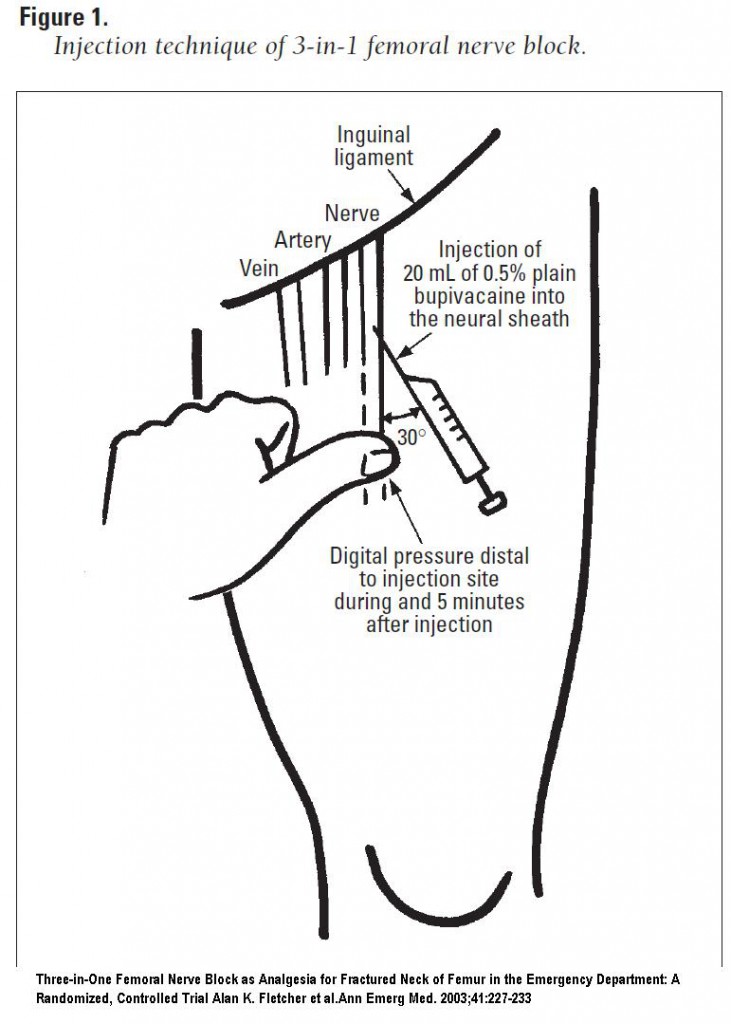 An even safer version of that was recently described: 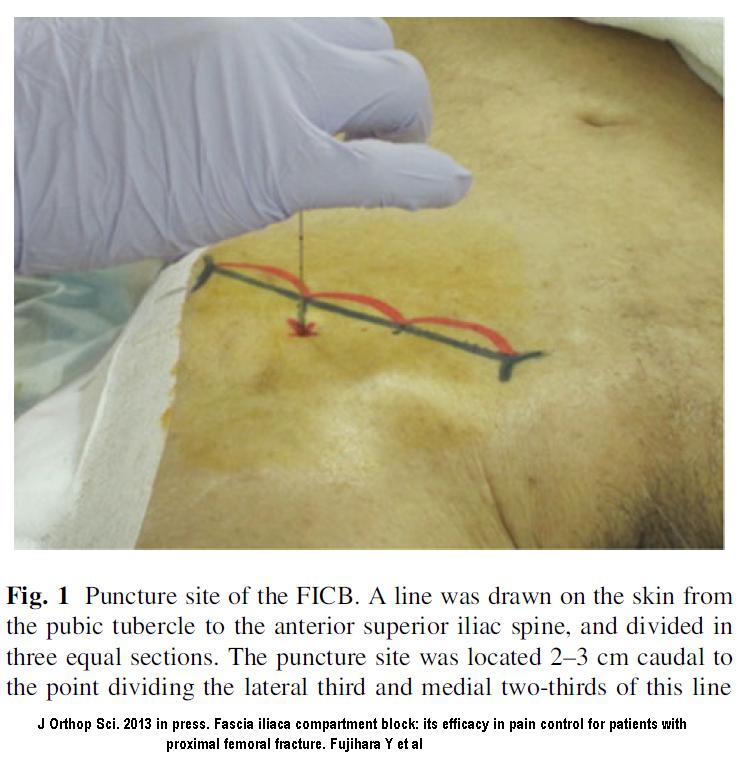 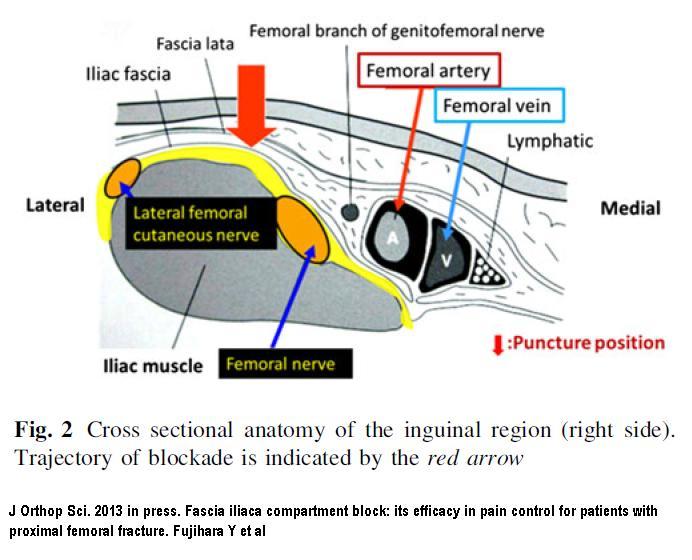 To improve things, hitting the Obturator nerve in the inner 1/3 of the groin under top layer of muscles  (from original image looks like they hit it at the level above pubic brim) 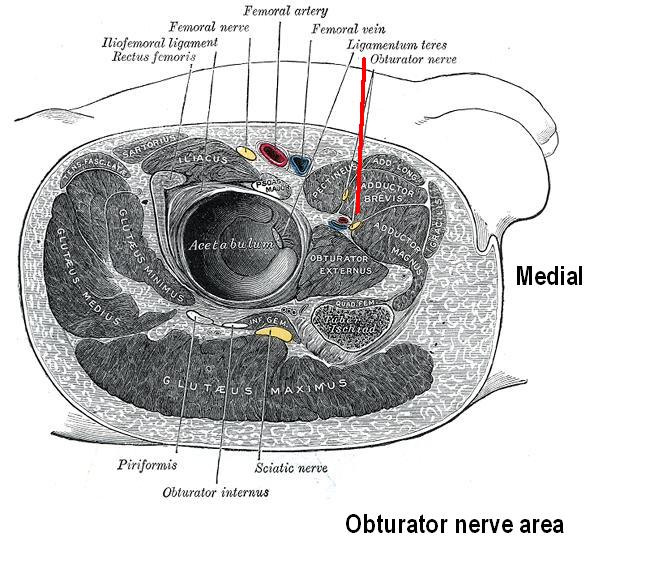 Depending on how well you block them, the subject might be in for a stay of some hours or need crutches to get out…

Comment – would like to see an actual “just local” inject into nerves rather than their study with steroids. If you are using steroid, doubt if you would need to inject more than one location. Am nervous about injecting around hip joint given steroid can cause bone marrow edema which leads to osteonecrosis and very bad things. Apparently, putting them on a statin, can reduce risk of osteonecrosis. nike air max pas cher nike air max pas cher

This entry was posted in Hip Pains. Bookmark the permalink.