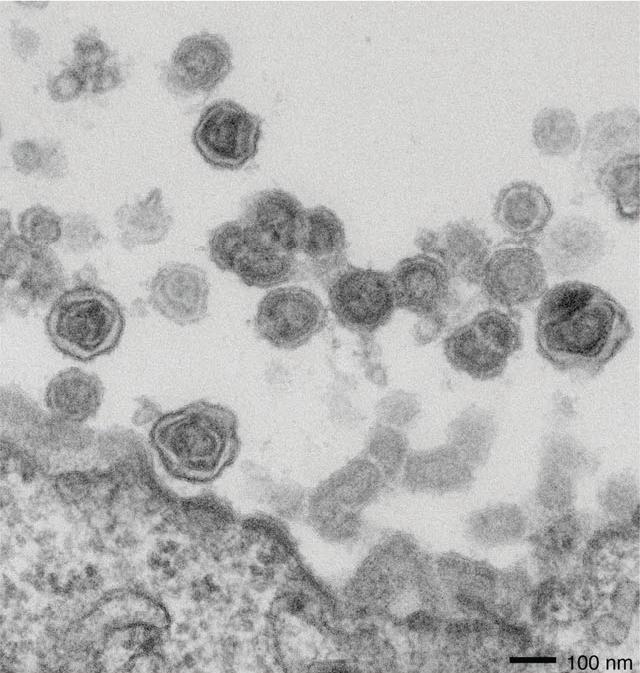 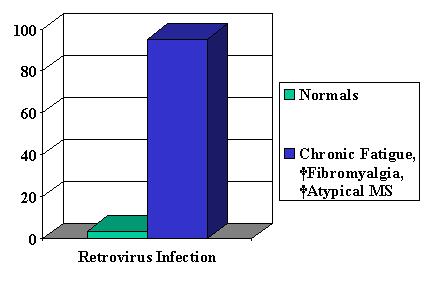 Addendum: British study unable to find XMLV in their population:

However, the Whittemore Peterson Institute contend that it would not be possible to isolate the virus using the dumbed down techniques used in the British study:

http://www.wpinstitute.org/news/news_current.html   – read “February 18, 2010: WPI is aware of the recent UK study that was unable to detect the presence of XMRV in any CFS patient samples” rebuttal

They also wonder about the geographical isolative idea when Japanese have found it in 1.7% of health donors.

Makes it more clear why it has taken so long to find the association – testing techniques mean everything…or infections are geographical. Having said that, it has been now concluded that 25% of cancers might be virally related:

The USA prostate cancer link was seen in cases with a genetic defect of RNASE – an enzyme that will digest the genetic material of RNA viruses so they are destroyed:

This defect was found to exist in chronic fatigue cases as well because the cell inadvertantly digests it – leaving cleaved material that is felt to be a valid maker of chronic fatigue.

Expert Opinion on Therapeutic Targets
March 2008, Vol. 12, No. 3, Pages 281-289; Intracellular immune dysfunction in myalgic encephalomyelitis/chronic fatigue syndrome: state of the art and therapeutic implications
Jo Nijs PhD & Marc Frémont PhD abstract here
” From the scientific literature it is concluded that proteolytic cleavage of the native RNase L enzyme is characteristic of the dysregulation of intracellular immunity in people with ME/CFS, but the origin of the dysregulation is speculative. There is increasing evidence for immune cell apoptosis and upregulation of various aspects of the 2′-5′ oligoadenylate (2-5A) synthetase/RNase L pathway in ME/CFS.”

The Utah group went after the HMLV in chronic fatigue because of this shared immune deficit with certain prostate cancers.
AUTISM LINK

Now it also appears this virus is connected to Autism as well in “significant numbers” and although autism involves genetic defects, the condition might as well be triggered by immune activating events like the MMR vaccine given at 18 months – something suspected for some time. I have one patient who was never the same after a hepatitis B injection and one wonders if people with Chronic fatigue/ fibromyalgia / autism have to be very careful with that vaccine..

What Determines who is sick?

One study looked at people who were high risk:

before ill risks were:

– illness behaviours -went to doctor more (in another study they could have called that a health behaviour – go figure)
– missed more work because sick
– various body complaints like irritable bowel etc.

Over 18 months, those that developed widespread pain much more likely to have:

They mention how much they think it is genetic, but do mention how early life traumatic experiences might create a rev’ed up cortisone HPA axis. Obviously a time of high stress and depressing times could generate this picture as well. I have my own view: 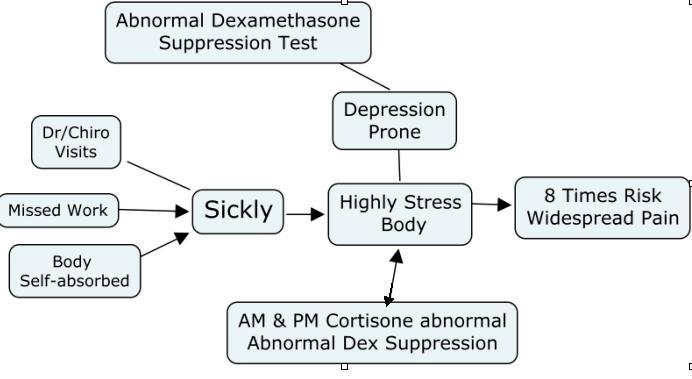 Factors then would include:

– anxiety and depressive risk
– genetics tendencies re above
– life experiences generating above
– highly stressed life – about half of FM sufferers can remember an incident were it overcame them – a car accident, ill health, divorce, death of a loved one and so on.

Their view is a little different – adapted from such ( I put up down on cortisol):

OK but what can make that better? – restorative (refreshed in AM)sleep

Afterwards, those who had better restorative sleep were much more likely to recover – trick is how does one get that deep sleep that stimulates your growth hormone surges at night that aids repair… that’s the ticket; sodium oxybate might but it is a date rape drug, highly regulated, and costs about $500/month to use.

Ok, Lets look at the infection angle – what can help that?

Much of it involves good clean living:

Live a careful life if you have a history of pain or depression in the family – go to work before the AM rush if you drive so less likely to get hit for instance. Save your money – living from visa bill to visa bill is a high stress.

They were able to upregulate 48 gene including some cancer fighting ones, and downregulate 453 genes, some cancer causing ones – obviously a major boost to the immune system.

How about herbal measures?

These are my suggestions:

For safe Zinc supplementation, it is recommended one stay less than 35 mg elemental zinc = 154 mg zinc sulphate or 260 mg zinc gluconate.
Zinc sulphate (Orazinc, Zincate) comes in 110 (and 220 mg) – stick to the 110 mg which is a safe 25 mg elemental

What about drugs? – Utah group made it clear those drugs tailor made for HIV may not be effective here. However they did suggest “AIDS drugs as well anti-inflammatory drugs and cancer-fighting treatments could be tested as potential treatments”

Addendum – out of ten anti-AIDS drugs, AZT was the only one found effective against XMRV :

a discussion of this can be found here:
AIDS Drug AZT Inhibits XMRV
by Vincent Racaniello link here

That is not completely true, there is an antiviral drug that was found useful in some chronic fatigue but NOT effective in pure HIV/AIDS (so how useful could it be in another retrovirus?)

Two co-conspirators to chronic fatigue would then be HH6 (a herpesvirus often acquired by the age of two) and Mononucleosis (around 80% immune in childhood). Getting mono in adolescence is fraught with problems as is associated with an up to 6 times risk of getting Multiple Sclerosis later if a certain genetic type.

With those sort of odds, one will need that government sponsored year off to recover…
What about Delivery?

“Cesarean delivery is recommended for an HIV positive mother… when she has not taken any anti-HIV medications” –
http://www.aidsinfo.nih.gov/contentfiles/Perinatal_FS_en.pdf

For XMLV, you will have to decide yourself though it is a retrovirus too…

People with chronic fatigue and fibromyalgia have been greatly under-rated for years:

The fatigue – An interesting testimony from someone who treats both HIV (AIDS) and chronic fatigue “I have treated more than 2500 AIDS and CFS patients over the past 12 years and my CFS patients are MORE sick and MORE disabled, every single day, than my AIDS patients are,
except in the last two weeks of life!”

The Pain – Wall and Melzack in their original book, used the McGill Pain Questionnaire to determine severity of pain. Fibromyalgia was way near the top: 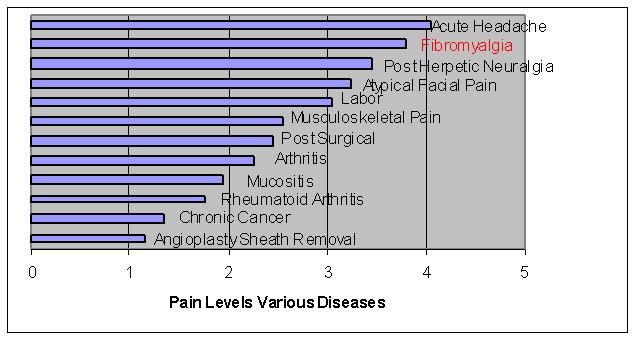 Addendum – Given the negative results of a prostate cancer study in Germany, I’ve been waiting for confirmation. One study is currently being done in Sweden:

Testing can be done through VIPDx labs

This entry was posted in chronic fatigue, Fibromyalgia. Bookmark the permalink.